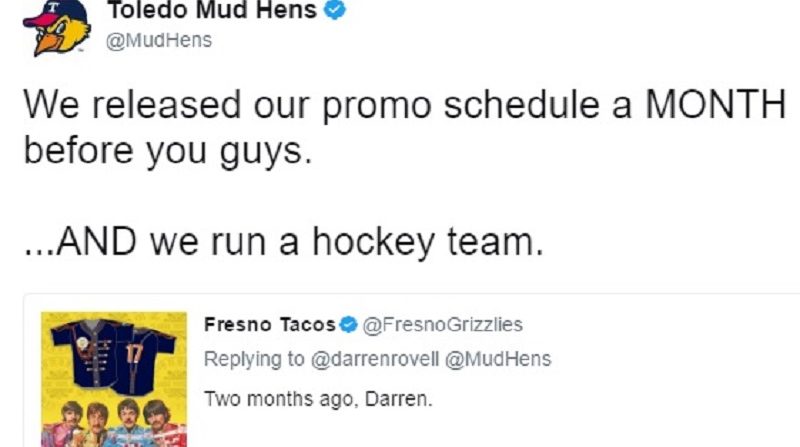 The 50th anniversary of one of the top albums of all time, Sgt. Pepper’s Lonely Hearts Club Band by The Beatles, is being celebrated a number of ways. That includes serving as the inspiration for a unique alternate baseball uniform by the Toledo MudHens, the Triple-A affiliate of the Detroit Tigers.

The MudHens showed off their colorful uniform design for a home game on June 16, in honor of the 50th anniversary of the groundbreaking album (which was released on June 1, 1967 for those wondering). Toledo will be going with the blue uniform similar to the one worn by Paul McCartney on the original cover of the album.

FIRST LOOK: Let us introduce to you our fab Sgt. Pepper's-themed jerseys we'll wear for 'Beatles Night' on June 16. pic.twitter.com/oiIjKUPLYg

Not so fast, Toledo! The Fresno Grizzlies are a tad upset, because they feel they had this idea first!

The MudHens aren’t about to back down in this ridiculous Twitter spat. Toledo whipped out the calendar and said they released their promotional calendar first, as if that is the ultimate decider in such a trivial issue.

We released our promo schedule a MONTH before you guys.

…AND we run a hockey team. https://t.co/I6sDPPQmon

Of course, Fresno is known for kicking up some dust on Twitter with other minor league baseball teams. The Grizzlies are in a virtual food fight with the Lehigh Valley IronPigs debating between tacos or bacon. It seems Fresno is here to take on all challengers in the ultimate online battle to determine which minor league franchise has the best promotions department.

As for these uniforms, it would appear Toledo has the advantage overall with a more faithful recreation to the source material, as close as a baseball uniform can get. Fresno’s shade of blue is too dark, although there is a slight deeper attention to detail on the Fresno versions of the uniforms worth recognizing.

Sadly, these two teams won’t be able to square off in a head-to-head matchup in their respective Sgt. Peppers uniforms as they play in different leagues. But should they collide in the Triple-A championship game (if the Grizzlies win the Pacific Coast League and the MudHens win the International League), maybe that can be arranged.