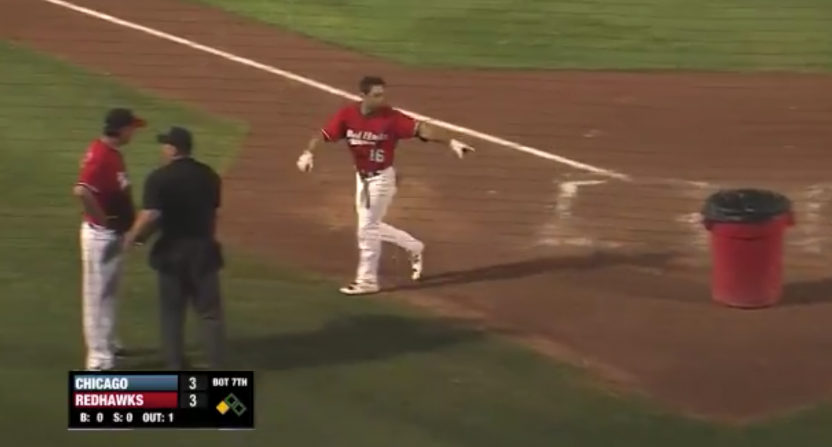 Brennan Metzger was batting for the Fargo-Moorhead RedHawks in the 7th inning on Monday evening when the umpire called a third strike on him. Metzger disagreed with that assessment and let umpire Mike Jarboe know about his concerns. Jarboe warned Metzger to direct his concerns elsewhere, Metzger refused to do so, and Jarboe tossed him from the game.

From there, Metzger stepped things up a notch, using some colorful language to give Jarboe “an earful” while manager Michael Schlacht held him back. The play-by-play announcer refers to Metzger as a “passionate, passionate ballplayer” and that turns out to be quite the understatement as the ousted player returns to the dugout, grabs a trash bin, and proceeds to take it onto the field and deposit it where Jarboe stands during plays behind home plate. As he passes Jarboe once more, he told the umpire to “go to your home.”

Someone's got a case of the Mondays… #SCNotTop10 @SportsCenter pic.twitter.com/FIhOJyXQbM

From there, Metzger exited the field, his performance piece complete. No word on whether or not Jarboe umped the rest of the game from inside the trash can.

In case you’re wondering, Metzger was a 22nd round pick by the San Francisco Giants in 2012 and a former minor leaguer in their organization, but was released a few years ago. He’s having a solid season for the RedHawks, hitting .311 with eight home runs, 36 RBIs, and 62 runs scored. It’s impressive that he’s still out there considering he’s undergone six surgeries and the removal of his colon related to Crohn’s Disease.