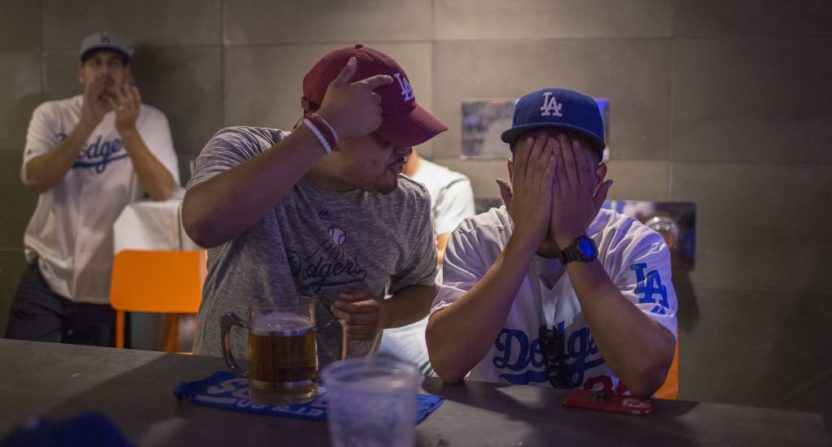 “You haven’t done sh*t until you win tomorrow.”

Those were the words of Tommy Lasorda to manager Dave Roberts after the Dodgers forced a Game 7 in the World Series. Unfortunately, they rang true. The Dodgers didn’t win the decisive game, rendering 104 wins and a pennant largely meaningless in Los Angeles.

Don’t get me wrong. Those are impressive accomplishments. This was the best Dodger team in recent memory, and they were beloved at Chavez Ravine. For all the talk about Los Angeles having the league’s highest payroll, the team was built with homegrown talent and diamonds in the rough.

But for a team that has become all too familiar with coming up short, 2017 becomes yet another disappointment. The Dodgers last won a World Series in 1988. Since then, they’ve made the playoffs 11 times, including seven of the past 10 seasons. The Dodgers have won the NL West each of the past five years. This year’s pennant is all they have to show for that regular season success.

It seemed like this would be the year. Most everything had fallen into place over the past few years, from new ownership to a forward-thinking front office led by Andrew Friedman. Dave Roberts is beloved in the clubhouse. The team has established stars, wily veterans and big-time prospects.

The team even made a big move at the deadline, something they’d been reticent to do in years past. The front office had been unwilling to part with prospects for a rental, but they pulled the trigger on acquiring Yu Darvish in July. Finally, the Dodgers had a frontline starter to pair with Clayton Kershaw in the playoffs.

Or so they thought. Ironically, it was Darvish who bears much of the blame for the Dodgers losing the World Series. He was sensational in each of his first two starts in the playoffs, helping the team go 7-1 as they breezed through the first two rounds. Against the Astros, he managed to get just ten outs in two starts. He officially lost two games in the series. Additionally, his short start in Game 3 likely contributed to the bullpen’s struggles in Game 5.

The crowd never really had a chance to get into the first ever World Series Game 7 at Dodger Stadium. Darvish allowed two runs in the first inning. It unraveled in the second inning. Inexplicably, he was left in to face George Springer a second time. Springer, who would go on to win World Series MVP, had already doubled against Darvish. He ended Darvish’s night with a two-run bomb that made it 5-0.

Darvish’s poor start was one of many things to go wrong for Los Angeles. The first six games of the series were sensational, but the Dodgers didn’t put up much of a fight in the finale. Dave Roberts, who has pushed the right buttons all year long, made mistakes. In addition to leaving Darvish in too long, the Dodger infield wasn’t playing in with two on and an American League pitcher at the plate. As a result, Lance McCullers picked up an RBI with a groundout.

Which brings me to offense. The Dodgers stranded 10 on base and went 1-for-13 with runners in scoring position. The aforementioned Lance McCullers — again, an American League pitcher — drove in as many runs as the entire Dodger offense. Even though the team was down five in no time, they had myriad opportunities to score and get back in the game. A game that neither Dallas Keuchel nor Justin Verlander started for Houston, no less.

It was a series of missed opportunities for the Dodgers. The Astros were spectacular and deserved to win, but the crazy games everyone will be talking about years from now are going to be remembered differently in Los Angeles. The Dodgers led in the ninth inning with Kenley Jansen pitching in Game 2. They gave Clayton Kershaw seven runs of support in Game 5. If the teams split those two affairs, the Dodgers are celebrating. But it was the Astros who won both.

The Dodgers will be back. Their fans aren’t suffering. But there is a generation that hasn’t witnessed a World Series win. Watching Kirk Gibson hobble around the bases in grainy standard definition marks the team’s most recent postseason triumph. The city deifies even the role players from that team. At some point, it’ll be about guys like Kershaw and Jansen as opposed to Hershiser and Gibson.