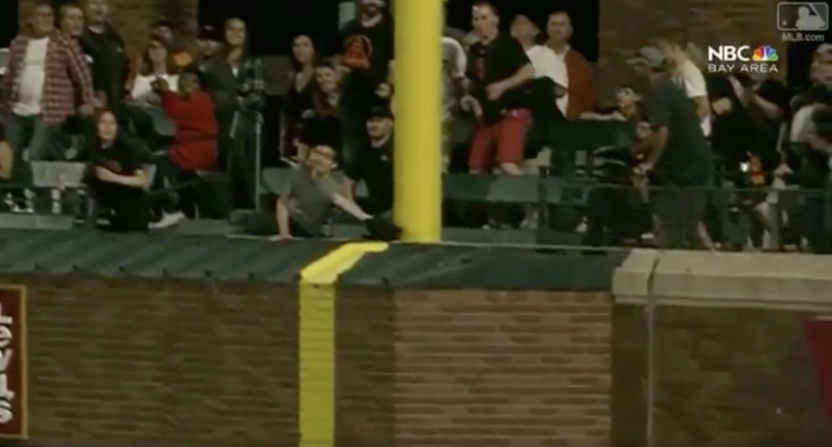 Thursday night, the San Francisco Giants found themselves down four runs to the St. Louis Cardinals in the bottom of the ninth. Buster Posey stood on second base and Brandon Crawford stepped up to the plate with a chance to chip into that lead. Crawford then smacked the ball down the right field line where it looked like it was just barely going to make it to the pole as a home run. That’s when a fan reached out and caught the ball in his glove.

Had the fan just let the ball go, it almost certainly would have hit the pole or the green tin overhang. The umps on the field agreed and called it a home run.

@MLBReplays even a blind man could ? this was a homer! What a disgrace robbing @bcraw35 of a legitimate homer @JalynneC35 this defies logic pic.twitter.com/B5hPiBrkm4

However, Cardinals manager Mike Matheny challenged the call and, following a four-minute review, the replay umpires upstairs reversed the call and turned it into a ground rule double. They even went as far as to say the video “definitively” showed the fan reached over the field of play when catching the ball, which he didn’t.

The Cardinals won 5-2 and they still probably would have won the game even if it had been called a home run, but pretty much everyone (except the Cardinals) seemed to think the call was terrible.

Friday, Major League Baseball announced that they agreed with that assessment as well.

“Major League Baseball acknowledges today that the instant replay ruling in the bottom of the ninth inning of Thursday night’s game between the St. Louis Cardinals and the San Francisco Giants regarding a potential home run was incorrect.

“The call on the ball hit by Brandon Crawford of the Giants was overturned via Replay from a home run on the field to fan interference, with the batter-runner placed on second base. The call should have been confirmed as a home run for Crawford. MLB regrets the error.”

It doesn’t change the outcome but at least it’s an acknowledgment that there’s still work to be done on the replay front.