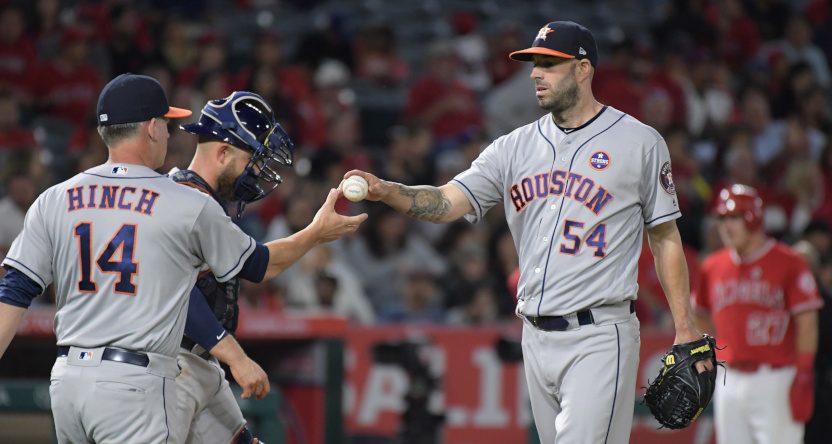 The situation around former Houston Astros’ assistant general manager Brandon Taubman and MLB’s investigation of the team may have taken a twist. Taubman was fired Oct. 24 after taunting female reporters with “Thank God we got Osuna! I’m so f——— glad we got Osuna” remarks on Oct. 19 (they were initially reported by Sports Illustrated‘s Stephanie Apstein on Oct. 21). MLB announced their own investigation into Taubman’s actions and the Astros’ culture on Oct. 22, and that investigation may now take a new turn thanks to reporting from Ken Rosenthal and Evan Drellich of The Athletic.

The piece Rosenthal and Drellich published Tuesday has four people who were with the Astros during the 2017 season, including pitcher Mike Fiers (seen above handing the ball to Astros’ manager A.J. Hinch in September 2017), state that the team used electronics to steal signs. Specifically, the piece says they used a center-field camera hooked to a TV screen in the dugout hallway, which led to team employees and players watching that feed, figuring out the signals, and then signalling batters in real time if an off-speed pitch was coming by banging on a trash can.

Using technology to steal signs specifically contravenes MLB’s rules (both at the time and now), and teams have been punished for it before, most recently with the Boston Red Sox in 2017. And it could be very interesting indeed if the investigation that started with Taubman’s comments winds up looking into these sign-stealing reports, and if it results in any punishment on that front.

Here’s more from Rosenthal and Drellich on what’s ahead:

Now, an MLB investigation into the Astros’ culture in the wake of the team’s firing of assistant general manager Brandon Taubman could be expanded to determine who in the organization was aware of the sign-stealing practice — and whether it continued or evolved in subsequent seasons. The Athletic’s confirmation of rule-breaking by Houston is limited to 2017.

“Beginning in the 2017 season, numerous Clubs expressed general concerns that other Clubs were stealing their signs,” MLB said in a statement. “As a result of those concerns, and after receiving extensive input from the General Managers, we issued a revised policy on sign stealing prior to the 2019 season. We also put in place detailed protocols and procedures to provide comfort to Clubs that other Clubs were not using video during the game to decode and steal signs. After we review this new information we will determine any necessary next steps.”

…In an expected interview with Taubman, whom the Astros fired on Oct. 24, during the World Series, for inappropriate comments and conduct toward three female reporters, MLB likely will attempt to learn as much as it can about the Astros’ operation. The league also is expected to interview current and former Astros players and employees, according to sources.

MLB has heard of this specific system before, but to this point the league has not gathered sufficient evidence to prove the Astros committed wrongdoing, sources said.

There’s some pretty good evidence floating around now, especially with the on-the-record comments to The Athletic by Fiers (now a pitcher for the Oakland A’s), with Danny Farquhar’s comments (now a Chicago White Sox minor-league pitching coach, he was pitching for the White Sox at Minute Maid Park in September 2017, heard the bangs and stepped off the mound), and with this Jomboy video showing what happened during that specific game:

It’s not clear how often the Astros used this. Not every player used the sign-stealing, and players who did use it didn’t use it all the time. Two Athletic sources said they used it during the 2017 playoffs, but one denied that and said it ended before the postseason (where, it should be noted, the Astros won the World Series). The Athletic’s reporting also only makes these allegations for the 2017 season, not beyond. But there is a fair bit to suggest the team did do this in 2017, and that seems like that may well prompt some action from MLB.

Obviously, MLB could have launched a investigation into this even if the Taubman situation never happened. And if they do wind up investigating the allegations here further, that may wind up being separate from what’s going on with the investigation around Taubman and the team’s culture. But the Taubman situation adds at least one new dimension; they now have a high-ranking former employee to talk to, one who was publicly fired by the team and may not be that interested in defending them further. (Oh, and speaking of high-ranking former employees, this comes around a time of further big changes with the Astros, with Nolan Ryan leaving his role as executive advisor, with Nolan’s son Reid being demoted from team president to executive advisor, business relations, and with owner Jim Crane’s son Jared “joining the leadership team.”)

Stealing signs in baseball isn’t new, and it isn’t explicitly prohibited except with the use of technology. If you have a runner on second stealing signs and relaying them to the batter, that may draw some criticism and comment, but it’s not specifically banned. But using technology to steal signs is specifically banned (both pre-2018 and then more explicitly still and with specific anti-stealing measures from the 2018 postseason on), and there’s a compelling case here that the Astros did just that. And while they may not be the only club to do so, there seems to be a fair bit of proof against them. So it will be quite interesting to see where MLB goes with this, and to see what comments Taubman and others wind up making on this front.