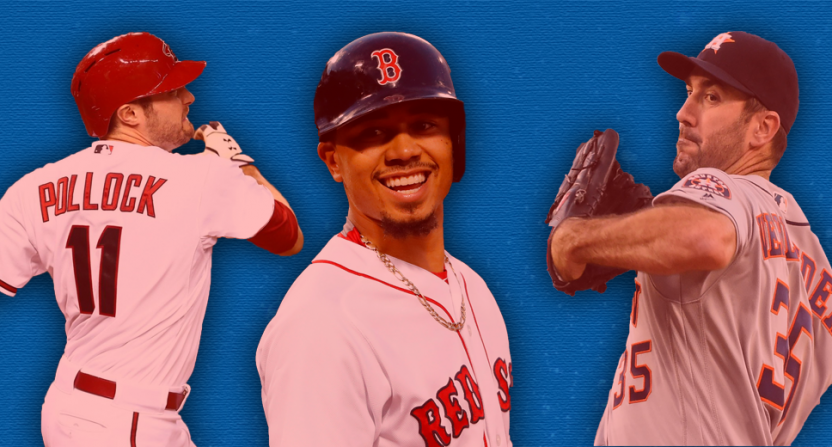 In a few days, the Major League Baseball season will be one quarter of the way over, which means that although it remains preposterously early to debate awards races, we’re going to do it anyway.

Here, we’ll go through the AL and NL MVP, Cy Young and Rookie of the Year races and assess who stands in front. To be clear, we’re not predicting who will win these awards at the end of the season, only who leads the pack today. And before you leave an angry comment about your favorite player being excluded, consider that most of these races are extremely close and could change in only a day or two. There’s a lot of baseball left.

This is currently a two-man race between Trout and Betts, and there’s no wrong answer. Betts leads Trout narrowly in home runs, slugging percentage, OPS and wRC+, but Trout has the edge in on-base percentage, while providing more value on the bases and playing a more difficult position. As a result, he tops the league in both Baseball-Reference and FanGraphs WAR and gets the edge here. But again, the difference has been minimal.

Further down the ballot we have Gregorius, who would have likely been first had we done this at the end of his remarkable April; Verlander, who continues to dominate in Houston; and Ramirez, who has quietly improved on the breakout 2017 season that earned him third place in last year’s voting.

Unlike the AL, where the leaderboards are largely packed with stars, the NL has been wacky this season, with some surprising names off to huge starts. We could have fit 10 different guys into the top spot at this point but ultimately settled on Pollock, who leads the circuit in slugging percentage, OPS and wRC+ while playing a fantastic centerfield.

Scherzer has been the NL’s most dominant pitcher yet again (more on him shortly), with Nola and several other brilliant hurlers not far behind him. Markakis, meanwhile, has produced a gaudy .333/.417/.533 slash line and could make the first All-Star Game of his 13-year career. As for Baez, the only thing keeping him from stardom was strikeouts. Now that he’s fanning less often, he’s a true five-tool threat.

Verlander has been an absolute monster this year, with an AL best 1.17 ERA and 70 strikeouts in 53 2/3 innings. He has been the best of an exceptional bunch, which includes his teammate Cole (1.42 ERA, 1.54 FIP, league-high 77 strikeouts) and perennial Cy Young contender Chris Sale (2.02 ERA, 63 strikeouts). Only in a very crowded field could Rick Porcello and Luis Severino fail to crack the top-three despite ranking in the top 10 in ERA, ERA+, FIP and innings pitched

Scherzer has a strong case as the best pitcher in the world, and he has pitched like it so far this season. He ranks second in the NL in ERA, ERA+ and innings pitched while leading in FIP and strikeouts. But don’t sleep on Nola, who seems to be fulfilling the ace-level expectations he faced as a top prospect; or deGrom, who was having his best season before hitting the disabled list with what appears to be a minor elbow injury; or Carlos Martinez, who leads the NL in ERA.

AL Rookie of the Year

Per FanGraphs, Ohtani leads all AL rookie position players in WAR… and ranks third among all rookie pitchers. This is his award to lose.

After Ohtani, there are a number of solid candidates, but it’s a pair of Yankees who stand out. Torres, one of baseball’s top prospect, has posted a .333/.373/.500 slash line with sterling defense, while Austin has chipped in with a .534 slugging percentage and five home runs.

NL Rookie of the Year

It’s entirely likely that the uber-talented Acuña will separate himself here before long, but for now the NL’s top rookies are a ballyhooed Dodgers starting pitcher with a 1.13 ERA in three starts and the first two-thirds of a no-hitter on his resume and a lightly touted Padres third baseman with a .258/.336/.563 slash line and 10 home runs (while playing home games at Petco Park).