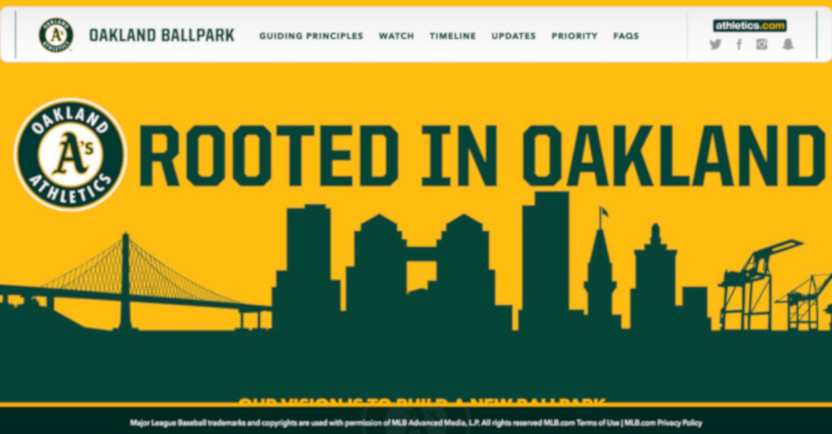 The Oakland A’s are the last remaining major league sports franchise in Oakland, following the relocations of the Raiders (to Las Vegas) and the Warriors (to San Francisco). Now, the possibility of them leaving as well is getting some more talk thanks to a report from ESPN’s Jeff Passan. Passan’s report states that while the team is still pursuing plans for a new stadium on the Howard Terminal site (the plans, and renderings of that proposed stadium, can be see on the City of Oakland site here, with more information on the A’s site here), they’re also now actively exploring relocation to other markets, and doing so at the behest of MLB. Here’s more from Passan’s piece:

The Oakland Athletics will start exploring the possibility of relocating with the blessing of Major League Baseball, a move that could put pressure on local government officials to greenlight a new stadium project that has spent years in limbo, sources familiar with the situation told ESPN.

The A’s, who have played in Oakland since 1968, have prioritized building a waterfront stadium in downtown Oakland at the Howard Terminal site. But after years of failed stadium plans — and weeks after the organization asked for the city council to vote on the $12 billion mixed-use development before its late-July summer recess — the long-anticipated specter of the A’s looking into relocation on Tuesday became a reality.

“The future success of the A’s depends on a new ballpark,” A’s owner John Fisher said in a statement. “Oakland is a great baseball town, and we will continue to pursue our waterfront ballpark project. We will also follow MLB’s direction to explore other markets.”

“MLB is concerned with the rate of progress on the A’s new ballpark effort with local officials and other stakeholders in Oakland,” the statement said. “The A’s have worked very hard to advance a new ballpark in downtown Oakland for the last four years, investing significant resources while facing multiple roadblocks. We know they remain deeply committed to succeeding in Oakland, and with two other sports franchises recently leaving the community, their commitment to Oakland is now more important than ever.

“The Oakland Coliseum site is not a viable option for the future vision of baseball. We have instructed the Athletics to begin to explore other markets while they continue to pursue a waterfront ballpark in Oakland. The Athletics need a new ballpark to remain competitive, so it is now in our best interest to also consider other markets.”

This is obviously very early in any sort of relocation. The team’s current lease at the Coliseum runs through 2024, and they’re still working on this stadium plan, and there isn’t a clear and obvious place for them to go right now. (Passan’s piece lists Las Vegas, Portland, Vancouver, Nashville, Charlotte, and Montreal as sites MLB has discussed for expansion, but all of those sites have some issues and some hurdles to clear.) At any rate, it’s certainly interesting to have MLB on the record with “it is now in our best interest to also consider other markets,” and also to have the league saying that rebuilding on the Coliseum site (not a plan the A’s have pursued lately, but one that many have brought up for them) is “not a viable option.”

That may just be pressure to try and get more public funding from Oakland for the infrastructure improvements the A’s want around the new stadium site. But it may also be the first step in an actual move of the team, and their “Rooted in Oakland” slogan may not apply for too much longer if so. We’ll see where this goes to.

[ESPN; top banner from a 2017 screengrab of the A’s ballpark site plan at that time from OaklandClubhouse.com]