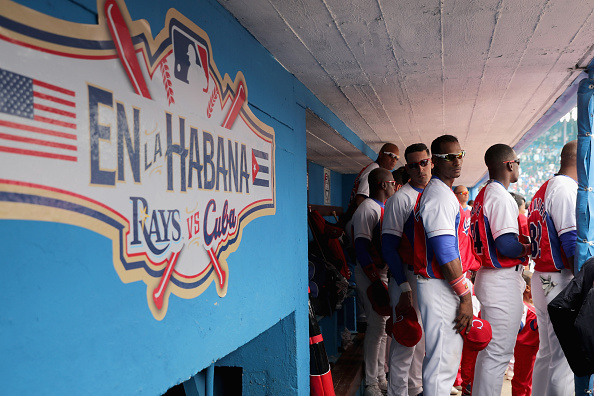 Growing up in Belgium, I got to see the Cuban National baseball team play each summer. Every year, it participated in the Haarlemse Honkbal Week or the World Port Tournament, international tournaments held alternately between Haarlem and Rotterdam, in the Netherlands. Most years, Cuba sent its strongest team.

So as a European teenager besotted by baseball – that’s another story for another day – I saw some of the finest players in the game, seen by too few others. In modest stadiums, I witnessed the prime of the legendary Cuban triumvirate of Omar Linares, Orestes Kindelan, and Antonio Pacheco that never answered the call of riches from across the Florida Straits. I saw Orlando “El Duque” Hernandez, Jose Contreras, Kendry Morales, and Yuniesky Betancourt long before they defected. I didn’t go the year Aroldis Chapman fled in Rotterdam.

They were unforgettable scenes. Like the time the Cubans literally showed up 10 minutes before their game with a Japanese team (a band of college All-Stars, I believe), played some catch in the outfield, and clobbered their meticulously drilled opponents 10-1. Or the predictable post-game bartering below the bleachers, where the Cuban players would hawk the boxes of cigars they had stashed in their luggage to eager buyers.

After the final – and they were always in the final – they would sell off every bit of their uniforms just to pocket some more cash to take home, presumably to help their families survive. In my closet hangs a signed, game-worn jersey previously owned by Norge Luis Vera, the long-time ace who once posted a 17-2 record with a 0.97 in a Cuban league not yet totally depleted by defections – in a 90-game season. When they got home, the Cubans simply told their government that they had lost their uniforms.

It was charming at the time. Even funny.

In retrospect, a country’s finest athletes demeaning themselves by giving the actual shirts off their backs to the highest bidders isn’t so cute anymore. Over the years, I learned more about life in Cuba and the daily humiliations of even its most talented athletes. Certainly, they weren’t entitled to more than their fellow man, but it’s fairly telling when a country can’t even afford to treat its most gifted and prominent well.

The Cuban team that played the Tampa Bay Rays in an exhibition on Tuesday is a shadow of what it might have been, had its best players not been employed stateside after undertaking often perilous defections. It would have been blown out by the 1999 team that split a goodwill series with Baltimore Orioles.

The golden age of Cuban baseball is likely over. Last year alone, more than 100 Cuban ballplayers defected. But before that, the Cuban National team dominated the international game in unfathomable fashion. It entered the now-defunct Baseball World Cup 35 times and won 25 of those editions. In five Olympic baseball tournaments, Cuba placed first three times and second twice. In the last decade, however, the defections began taking their toll. Cuba reached the final of the first World Baseball Classic in 2006, but placed sixth and fifth respectively in 2009 and 2013.

With the market finally opening up to the United States, the Cuban National Series, the foundation of all that success, will likely become an anonymous circuit for those not good enough to sign with American teams. And those who are good, probably will only be available to their national team for the quadrennial World Baseball Classic, since Major League Baseball severely restricts players’ freedom to represent their countries once they reach big league rosters.

Anybody on a 40-man MLB roster wasn’t allowed to participate in the Olympic baseball tournaments, which is a large part of the reason Cuba won so often. If baseball returns for the Tokyo Games in 2020, as it’s expected to, 25-man roster players likely still won’t be allowed to partake.

All of that is just baseball though. And society at large trumps sports. For all of ESPN’s cheerleading of it as a sporting event, Tuesday’s United States-Cuba exhibition in Havana was significant only as a symbol of the long-overdue thawing of relations between the countries. When Dayron Varona, a Cuban defector with a thick golden chain poking out from under his uniform, stepped into the box for the Rays and popped up on the first pitch, it was poignant.

But if this game foretells the decaying of Cuba’s league and national team, while the agreement to allow Cubans to sign in North America freely is being hashed out, the humanitarian upside of these political gains are more than worthwhile. The mystique of Cuban baseball will probably crumble and the island will become just another Caribbean breeding ground of ballplayers in a cluster of them.

If all of this, however, means that a suffocating regime’s 56-year grip on its beleaguered people is loosening, losing a baseball institution as collateral damage is a small price to pay.

1 thought on “The golden age of Cuban baseball is over, and this is good”