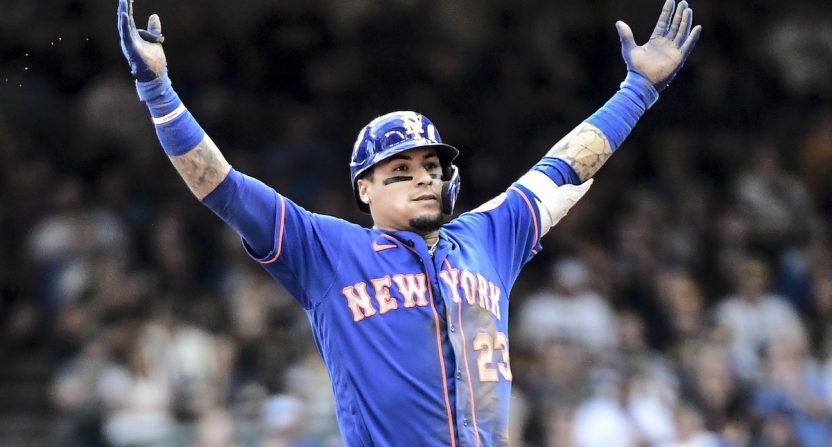 Joining in the signing frenzy to beat the Dec. 2 deadline for a team owners’ lockout, the Tigers have their man. But it’s not the guy many Detroit baseball fans wanted. Late Monday night into Tuesday morning, the team worked out a six-year, $140 million deal with Javier Baez.

Javier Baez and the Tigers are nearing a deal, per source. It is expected to be a six-year contract worth $140 million.

The Athletic’s Ken Rosenthal later added that Baez’s contract includes an opt-out after two years and a limited no-trade clause allowing him to list 10 teams to which he can’t be dealt.

Javier Báez’s six-year, $140 agreement with the Tigers includes an opt-out after two years and a limited no-trade clause allowing him to block deals to 10 teams each year, sources tell @TheAthletic. First to report news of the deal: @jonmorosi and @feinsand.

Sounds like #Tigers folks were awake until 3:45 a.m. working on the Javier Baez deal.

Detractors will point out his NL-leading 184 strikeouts, 28 walks, and .319 on-base percentage, all of which are valid reasons for concern. But Baez also adds extra-base power, excellent defense and baserunning, positional versatility, and a star presence to a team in dire need of improvement in all those areas.

This is an obvious upgrade for a Tigers club that produced a collective .201 batting average (last in MLB) and .595 OPS (worst in the American League). Defensively, Detroit shortstops compiled -15 Defensive Runs Saved (third-worst in baseball) and an Ultimate Zone Rating of -3.8 (sixth-worst).

Love Javier Báez's artistry and flexibility but not getting Carlos Correa feels like the ultimate "is Pepsi okay" moment.

Among qualifying SS during the 2021 season, Baez ranked 19th overall in OBP. pic.twitter.com/u21PBRHeHd

But Baez isn’t Carlos Correa, which is a disappointment to many Tigers fans who wanted the best available shortstop and a superstar talent. Fans also believed Detroit might have a built-in advantage to signing Correa with his former manager A.J. Hinch now leading the team. Here’s a sampling of the letdown some are feeling:

Horrible, horrible deal. 6 years is about 4 years too many. Electric player, for sure. But lifetime .307 OBP. When the bat speed declines just a little, this guy is toast. https://t.co/ulqPhEqm9j

And mark it down, today is a flashpoint in the history of the Detroit Tigers. 10 years from now let’s look back and see if signing Javier Baez works out better for them than whoever signs Carlos Correa.

However, the key aspect of Baez’s deal with Detroit is how much less it is than what Correa will likely sign for, especially after Corey Seager set the free-agent shortstop bar high in his 10-year, $325 million contract with the Texas Rangers. Most MLB insiders and beat writers who cover the Tigers reported that the team preferred not to pay out a deal exceeding $300 million and be locked into it for at least a decade.

Though the circumstances are obviously different, Detroit is nearing the end of the eight-year, $242 million extension (amounting to a 10-year, $292 million agreement) given to Miguel Cabrera in 2014. Then 31 years old, he was already on the decline of his career, resulting in essentially a lifetime services contract from owner Mike Ilitch.

I understand this perspective.

But the final Cabrera extension was a bad and utterly baffling deal from the second it was signed (and many said so at the time).

If the Tigers don't start regretting the Correa deal until 2025 or 2026, that counts as a win in free agency. https://t.co/kPUonuEuqy

With the senior Ilitch passing away in 2017, his son Christopher took over the Tigers. And ever since, he has cut payroll and jettisoned aging players (except for Cabrera and his untradeable contract) in a five-year rebuilding project that’s left Detroit among the worst teams in baseball.

The greatest fear among Tigers fans is that Christopher Ilitch would maintain his low-spending approach, going back on his pledge to spend more money as the team improved. To many, opting for Baez over Correa confirms those concerns.

The #Tigers are on the cusp of adding a very good player. I think that's getting lost in all of this. And If signing Javy Baez instead of Carlos Correa allows them to add another good starting pitcher, then this move makes a lot of sense.

Obviously we don't know specifics yet, but if the #Tigers are signing Baez for the reports (6 years, $140M)…

Yet many are pointing out that Baez’s deal will probably be half of what Correa eventually gets, in terms of money and possibly contact years. That arguably presents a greater value and allows the Tigers to take what would’ve been spent on Correa to bolster other areas of the roster with another outfielder, starting pitcher, or reliever.

I know Tigers fans aren’t happy that it wasn’t Correa.

For almost half of the cost, they got a stud of a shortstop with a good bat. His K% was down nearly 10% with his new approach. And still plenty of money to go out and spend elsewhere.

Let’s go over this Javy Baez to the Tigers thing…

I get that Tigers fans badly wanted Carlos Correa. Obviously. That’s a no-brainer. But you just got a ridiculously talented 28-year-old SS for half the price.

Javy Baez makes the Tigers instantly better. Not even a question.

The promise with a rebuild is that it will eventually yield a payoff as young prospects hopefully develop into stars and budget is cleared to make room for big contracts again. That’s what Tigers fans have been tolerating for the past five years (seven, really), waiting for the day that talent like pitchers Casey Mize, Matt Manning, and Tarik Skubal progressed into major leaguers with slugger Spencer Torkelson and outfielder Riley Greene joining them soon.

Detroit finished third in the AL Central last season, finishing over .500 (37-34) in the second half of the campaign and looking like a team on the rise. This is the time to add star players to a building core of young talent, which is why fans — and many in baseball media — pointed to the Tigers making a major splash in free agency.

For some, Javier Baez falls below lofty expectations. But the Detroit Tigers are certainly better than they were less than 24 hours ago. And they could improve even further. If (when?) that happens, the sting of losing out on Carlos Correa will be lessened.