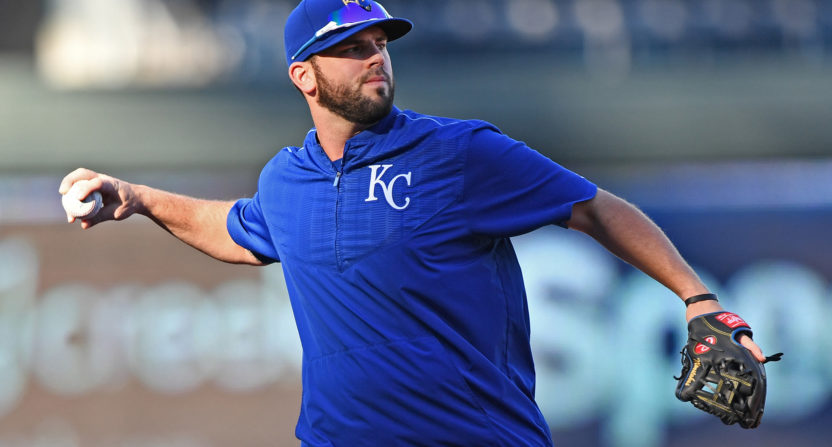 After three and a half months of painful inaction, Major League Baseball’s free-agent dam has finally broken. Yu Darvish signed with the Cubs, Eric Hosmer inked with the Padres, J.D. Martinez reached terms with the Red Sox, and numerous other lesser players found new teams as well.

And yet the hot stove is far from burnt out. Five of the offseason’s 11 best free agents, per MLB Trade Rumors, remain unsigned, as do about a half dozen other top-50 guys. It’s a jarring amount of talent to see on the market in late-February.

In some cases, it’s easy enough to explain why big-name players can’t find new deals. In other cases, it’s tough to figure. We asked our writers which free agent they were most surprised to see unsigned. Here are their answers.

Matt Clapp:  I’ll go with Neil Walker, whom we haven’t heard much at all about for some reason.

Walker has been a consistently good player for eight straight seasons. Like, *really* consistent. Every season since 2010, Walker has had an fWAR between 1.9 and 3.7, and an OPS between .742 and .823. He’s never been an All-Star, but he’s reliably good on an annual basis.

Now, he’s 32, and you never know when that decline will come. But he’s coming off an .801 OPS, 2.1 fWAR season. He looked like the same old Neil Walker offensively and still looked solid defensively at second base. The range may not be what it once was, but it’s good enough, and he’s going to make the routine plays.

Walker could make several competitive teams a couple wins better on paper, and in this market, potentially at a pretty cheap cost. He’s far and away the best middle infielder on the free agent market and will likely have to settle for a short-term deal. So, it’s bizarre to me someone hasn’t already snagged him, unless he’s trying to create a bidding war… in which case it’s even more confusing that we haven’t heard more about teams trying to sign him.

Ian Casselberry: Maybe I shouldn’t be surprised, considering how he seems to alternate good seasons with bad ones. But I thought Mike Moustakas would have signed by now. Unless it hasn’t been reported, it doesn’t appear that he was seeking a six- to eight-year deal like former teammate Eric Hosmer. And there are a few teams that could really use his power at third base. Maybe some — like the Pirates, Reds and especially the Marlins — aren’t interested in spending big free agent dollars. The Giants solved their third-base problem by trading for Evan Longoria, while the Mets and Angels opted for cheaper alternative with Todd Frazier and Zack Cozart, respectively.

Admittedly, that doesn’t leave many options for Moustakas. He’s still a fit for the Cardinals and Braves, and the Yankees have seemingly been waiting the market out, hoping Moustakas blinks and takes a short-term deal. That still seems like a very real possibility, especially since Moustakas could put up numbers in Yankee Stadium that make him more attractive in free agency next year. (And maybe he can market himself as a strong alternative to Manny Machado, especially if Machado prefers playing shortstop.) But it’d be really fun if the Indians decided to swoop in and snatch Moustakas up.

Joe Lucia:  I know he was pretty bad last year, but Jonathan Lucroy still not having a job shocks me, especially given the state of catching across the league. Lucroy is 32, which isn’t young, but I think he’s still got something left in the tank. Just a year and a half ago, he was one of the most popular trade targets (and sure enough, the Rangers gave the Brewers a king’s ransom for him), and now, he can’t even get a backup job?

Alex Putterman: I’ll go with Greg Holland, not because he’s the best free agent available (that’s Jake Arrieta) but because he’s the type of player every single team in baseball could use: a solid reliever with ninth-inning experience.

The hold-up for players like Mike Moustakas and Neil Walker is that most contending teams are fairly set at their positions. You can only have one starting third baseman, and if that role is filled, you have no need for Moose. But no matter how many good relievers you have, you can also benefit from one more. Sure Holland cratered down the stretch last year in his first season back from Tommy John surgery, and his days as an elite closer very well might be over. But clearly the guy can still help a bullpen. You would think some team would have enough interest in Holland to get a deal done.

MLB Trade Rumors listed 14 relief pitchers among the offseason’s 50 best free agents. Thirteen of them are signed. The fourteenth is Holland.