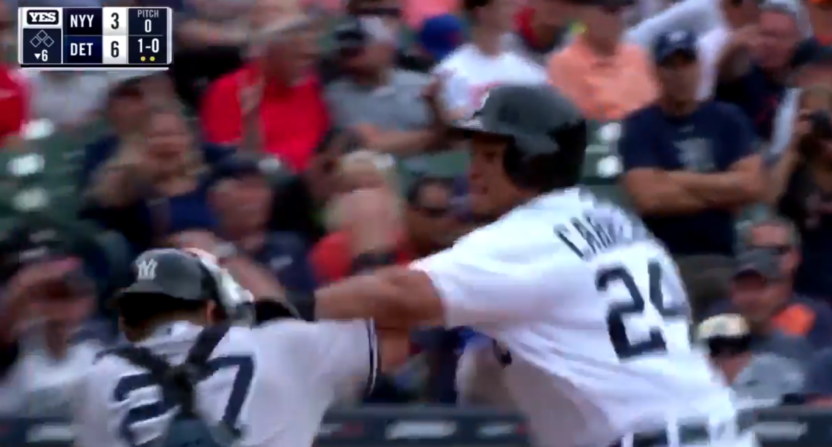 Just a day after the Yankees and Tigers engaged in a gigantic brawl (they also played a baseball game, though that was less entertaining), MLB has lowered their own boom in the form of multiple suspensions and fines for the players and managers involved.

A refresher on the brawl itself:

And here’s the punishment, as tweeted out by MLB’s communications office:

Discipline has been issued to members of the @tigers and the @Yankees as a result of the bench-clearing incidents during Thursday’s game. pic.twitter.com/vTJ5KQlVyx

Miguel Cabrera gets seven games, which makes sense, as he swung the first few punches (including one devastating left that looked to land flush; if Conor McGregor gets off anything that clean tomorrow night, the $100 pay-per-view cost might be worth it). Gary Sanchez gets nailed with a four-gamer after his sucker punch, which you can see in this gif:

Good look at the Sánchez sucker punch here. No. 24 in gray, right side of the video, has to be forcibly yanked from the scrum pic.twitter.com/enL7ezfkXG

Romine, arguably as much an instigator as Cabrera, only gets two games, which might not sit well with Detroit fans. Also, Brett Gardner, who was incredibly mad, was one of the players fined:

Going further, Tigers pitcher Alex Wilson and Detroit manager Brad Ausmus have their suspensions linked, as they were the result of Wilson hitting Todd Frazier after both benches had been warned. Altogether, for a fight of that magnitude, this is about what you’d expect to have.

Surely some/most players will appeal, and a few might even get some games knocked off; plus if Wilson’s suspension is lifted, Ausmus won’t have one at all. The real question, though, is whether or not these penalties are enough of a deterrent for incidents like this. Gary Sanchez essentially ran in from the side and delivered a few cheap shots, faced no on-field repercussions, and is suspended four games before appeal. That equates to roughly 2.5% of the season.

Sure, they lose game checks, which isn’t nothing, especially for players on rookie deals. But it also kind of demonstrates that MLB really doesn’t care if you fight; if you want to do it and are willing to pay the nominal penalty, just go for it. Gary Sanchez likely isn’t going to get a twenty game suspension if he jumps into another brawl in a few weeks.

And hey, maybe that’s fine! If baseball is clearly okay with ridiculous brawls, they should just come out and say so.