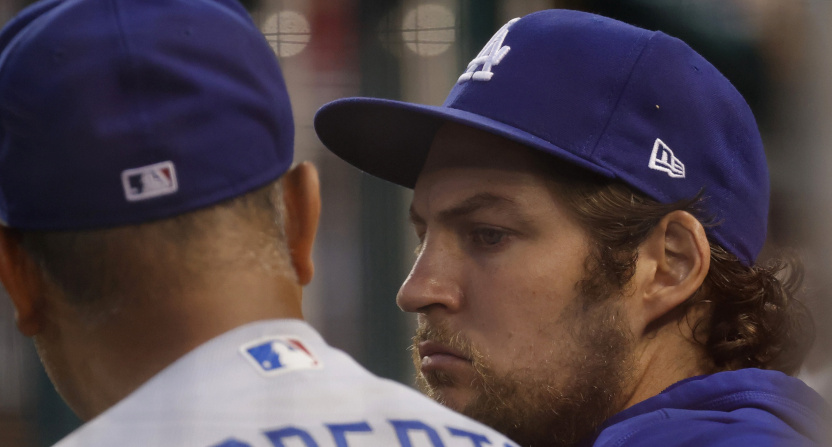 Tuesday saw the news that Los Angeles Dodgers’ pitcher Trevor Bauer was under police investigation for assault, and Wednesday saw The Athletic reporting the extremely graphic details of allegations of sexual and physical assault against him from an ex parte motion for a temporary restraining order. Bauer’s co-agent Jon Fetterolf has disputed that with a statement, which can be read in full here, and his team has indicated they intend to contest those allegations at a July 23 hearing. Meanwhile, Dodgers’ manager Dave Roberts (seen above in the team dugout with Bauer Thursday) told reporters Thursday that they still expected to start Bauer Sunday, saying that that was the guidance he’d received from MLB. On Friday, that MLB approach changed, with the league placing Bauer on seven-day administrative leave:

Dodgers pitcher Trevor Bauer has been placed on administrative leave while MLB continues its investigation into allegations made against him. pic.twitter.com/4SLsmmprEc

That does seem like quite a change of course, as Roberts’ comments Thursday were that his decision to keep moving forward with Bauer as a starter was based on league recommendations. Here’s more on that from The Associated Press:

Roberts said Thursday that Bauer’s availability to pitch is “out of our hands,” deferring to the league. Under the Joint MLB-MLBPA Domestic Violence Policy, MLB Commissioner Rob Manfred has the power to place a player on administrative leave while allegations are investigated.

“I’m in the position of following the lead of Major League Baseball,” Roberts said. “Their recommendation was for us to … he was our scheduled (starter) Sunday, and to move forward and start that game on Sunday. And so for me to try to read into it anymore outside of what they advised me and us to do, I just choose to follow their lead.”

Under the 2015 joint domestic violence, sexual assault and child abuse policy MLB agreed to with the MLBPA in 2015, the league does have the power to institute administrative leave or suspensions for domestic violence regardless of the criminal outcome of a case. For example, Aroldis Chapman received a suspension for 30 regular season games back in 2016 over a 2015 incident involving alleged choking of his girlfriend, Cristina Barnea, and firing of shots in his garage. Prosecutors ultimately declined to lay charges in that case.

This is just the latest situation facing MLB under that policy. Earlier this year, free agent reliever Sam Dyson was suspended for the entire 2021 season following an Athletic report of sustained abuse from his former girlfriend, Alexis Blackburn; no criminal charges were filed in that case. Meanwhile, the Braves’ Marcell Ozuna is still facing felony criminal charges of aggravated assault strangulation and misdemeanor battery- family violence around a May incident where he allegedly grabbed his wife by the neck and threw her against the wall. Ozuna did post bail in late May, but has not played for the Braves since then.

The seven-day administrative leave here from MLB seems like a reasonable solution, as that gives them a little time to pursue their investigation before coming to an actual conclusion on if Bauer should face punishment under this policy. However, they’re still going to have to make a decision there relatively quickly, and they will have to make that decision before the hearing where Bauer intends to have his team contest this restraining order. We’ll see where they go from here.