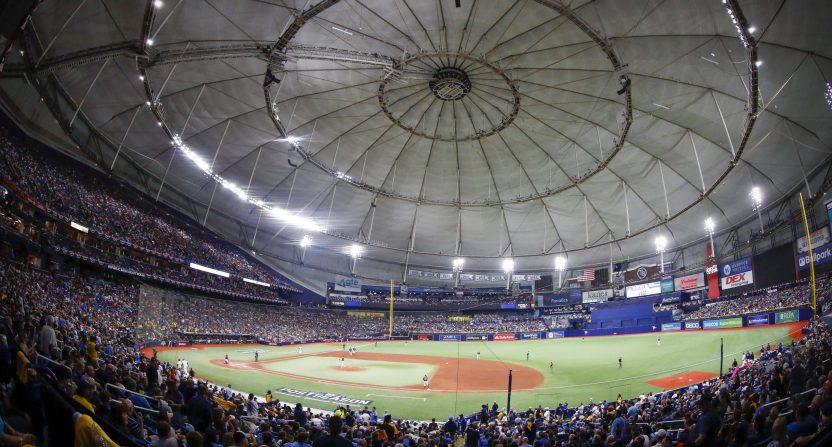 After talks broke down between the Tampa Bay Rays and Tampa area officials in 2018 over new stadium plans, the Major League Baseball franchise started working on a split-season plan in which they would play half of their home games in Tropicana Field and the other half in Montreal, Canada, former home of the Expos.

The idea was that considering the Rays were always near the bottom of the league in attendance and revenue, splitting their season would allow the franchise to maintain a connection to its home base while also generating more revenue through a new fanbase and media market.

However, there were significant stumbling blocks with the plan, including the need to get multiple stadiums built for the near future and how it would impact players to require housing in two separate countries, not to mention how it would impact their salaries.

MLB’s eight-member executive council gave them permission in 2019 to explore the split-city plan and MLB Commissioner Rob Manfred even sounded optimistic about it in 2020, telling the Tampa Bay Times, “I am 100 percent convinced and, more importantly, the other owners have been convinced by Stu, that this is best way to keep Major League Baseball in Tampa Bay.”

BREAKING: #Rays season-sharing plan with Montreal killed by MLB, search back on for a full-time home https://t.co/pH2pAHBUf0

Two and a half years later, however, MLB has killed the plan, according to the TB Times. The Rays are apparently shocked by the decision though the reason has not been made public yet.

The big question is, what will the Rays do now? Will they go back to Tampa officials yet another time to try to figure out a stadium deal, or will they ask MLB for permission to consider relocation altogether? The franchise’s lease agreement at Tropicana Field expires after the 2027 season, which means they’d probably need to have their plans for a new stadium in place no later than 2023 to give themselves enough time to have it approved and built by 2028.

While we wait on more details about the decision and what comes next, the reaction to the news was felt across many MLB corners.

This never had a shot of becoming a reality.https://t.co/07U7j8GfwP

They’ll have to go to Montreal full time I guess. https://t.co/15inpeADEy

Best news I've heard about the Rays in a good bit.

This halfsies shit would've been a disaster waiting to happen. Nobody wants to "share" a franchise with another city.

Gee, it seemed like such a GREAT and WORKABLE idea, too! https://t.co/PHkOnlFgCU

stupid and untenable idea — that instead of one city unwilling to fund a brand new ballpark for full-season use, two cities were going to do so for part-time use while getting the players to agree to an internationally bifurcated existence — winds up where it belongs https://t.co/5A0Fo6xV76