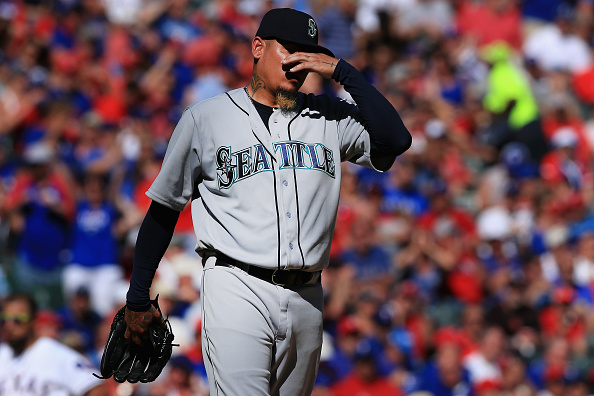 MLB Opening Day Part 1 and Part 2 are in the books, and the baseball season is underway. Well, sort of. Six teams still haven’t played games yet because of either scheduling quirks or weather issues. And the Rays and Blue Jays are already two games into their season, while everyone else is just one game in.

But no matter — baseball is back, and that’s awesome. The full slate of games on Monday resulted in some incredibly weird situations unfolding across the league, and here’s a look at a few of them.

** Speaking of Rangers-Mariners, this was only the second time since the Rangers moved to Texas that they recorded just one hit and won the game (July 27th, 1993 against the Royals).

** This was also the only time in Mariners history they had allowed just one hit and lost the game. Poor Mariners.

** It’s also the seventh time in Felix Hernandez’s career he’s allowed one hit in a start. The Mariners won the first five of those starts… and lost the last two, including Monday.

** The highest game score on Monday was posted by Clayton Kershaw. The second-highest was by Jake Arrieta. Those aren’t surprises. But the third-highest was put together not by Max Scherzer, or Chris Sale, or Cole Hamels, or Felix Hernandez, but by… Jeremy Hellickson of the Phillies. He allowed one unearned run on three hits in six innings against the Reds, striking out six without a walk en route to a game score of 70.

** Of course, the Phillies bullpen blew that game for Hellickson. It was just the second time in his career (out of 17 instances) in which the former AL Rookie of the Year recorded a game score of 70 or above and his team lost the game.

** Joey Votto struck out three times in that 6-2 loss to the Phillies. That only happened five times last year.

** Scooter Gennett homered off of Bumgarner. It was his first-ever homer against a lefty.

** Tyson Ross gave up eight runs as the Dodgers pantsed the Padres 15-0. He’s only done that once before in his career, back in 2012 when he was still with the A’s.

** This was also only the fourth time that any team scored 15 runs at Petco Park, and the first since a pair of occurrences back in 2010.

** Zack Greinke gave up three homers in his Diamondbacks debut. He hadn’t done that since 2009, the year he won the Cy Young with the Royals.

** Greinke also gave up seven runs in that Diamondbacks loss to the Rockies, the first time that happened since 2012, when he was a Brewer (remember that?).

** In his first major league game, Trevor Story hit a pair of homers for the Rockies. That’s happened four other times in MLB history: JP Arencibia in 2010, Mark Quinn in 1999, Bert Campaneris in 1964, and the legendary Bob Nieman in 1951.