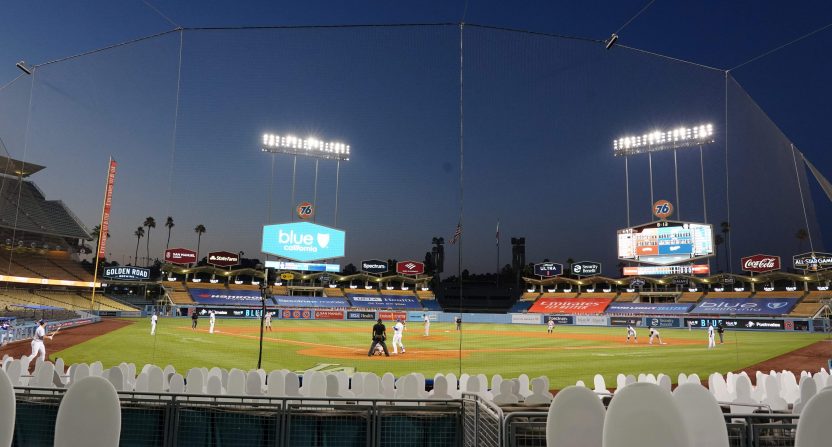 Well, we all knew it was going to happen – after MLB expanded the Postseason for the 2020 season due to the pandemic slashing the regular season to 60 games, the league is now pushing for expanded playoffs in 2021 and beyond.

Manfred also said the expanded, 16-team postseason is likely to remain beyond 2020, adding that “an overwhelming majority” of owners had already endorsed the concept before the pandemic.⁰“I think there’s a lot to commend it,” he said. https://t.co/7NeSIpCsjv

Once again, the league is thinking about short-term gains rather than long-term gains. By expanding the Postseason in 2021, when the league will theoretically be playing a 162 game regular season, baseball is valuing TV money for those extra games more than it values other revenue sources, including attendance and local TV revenue.

In expanding the Postseason, MLB is essentially casting the results of a 162 game season into the trash. Why fight and claw and scrape to win your division when the reward is…a guaranteed three game series at home, as opposed to a one-in-three chance at a three game series at home if they finish second? Under the current format, winning your division guarantees you a spot in the best of five Division Series. Now, there isn’t a huge difference between finishing first and second – you’re still in the dance, and you still need to win two out of three to advance.

Also, shit can happen in a short series. The MLB schedule is made of three game series. In last year’s Postseason, the Nationals and Cardinals were both down 2-1 in the NLDS, and rallied to eliminate the Braves and Dodgers, respectively, in five, while the Rays rallied from 2-0 down against the Astros to force a Game 5 (which they eventually lost). In a three-game Wild Card series, those comebacks (though each of those teams would have faced a different team) would not have happened. Any given team can lose two out of three to another, far inferior team without ending their year during the regular season. The Dodgers were the best team in the NL last year, and lost home series to the Giants, Padres, and Angels last year, all of whom finished under .500. The Astros were the best team in baseball, and lost a 2019 home series to the Pirates, who were one of the worst teams in baseball. How would it be good for baseball if the best teams are capable of getting bounced if they lose two out of three at home?

I’m also worried about what this will do to the trade deadline. Will it make teams more aggressive toward buying, as commonly stated, or will it actually make them more tentative to selling? At the 2019 trade deadline, there was just one AL team (the Rangers at 54-54) within six games of a playoff spot under the eight team format. In the NL, the standings were far more clumped – every team except the Pirates and Marlins was within six games of a playoff spot. Would the Giants have been deadline sellers under the current format? Would the Diamondbacks have traded Zack Greinke when they were a game and a half out of a playoff series with the NL Central winner? Similarly, would the Astros have traded for Greinke, knowing that their reward for finishing with the best record in the AL instead of the second-best record was a series with the second Wild Card instead of the first Wild Card?

As for free agent spending, it was also presumably decrease, since the bar for getting to the playoffs is much lower. This past winter, would the Braves have spent on Will Smith, Marcell Ozuna, and Cole Hamels if their potential reward was a three-game series with the Phillies or Cardinals rather than a five game series with the Cubs? Or would they have been content to spend less, knowing that even if they slipped to second (or even third) in the NL East, they’d still be in the dance with a punchers chance of winning two out of three from a better team?

If MLB wants to expand the Postseason, the best way to do it is to still actively reward division winners. Under the 2020 plan, the reward for winning the division is minimal – you get an extra home series! Woohoo! Under the 2019 format, teams who win the division advance to the best of five Division Series, and can still lose two games in a row without having their season come to an end. And to actively reward division winners, you make it as difficult as possible for the second place/Wild Card winners to advance.

I present the tiered format to you. Under this format, the division winners would advance to the Division Series (best of five/seven games, whatever), and the lesser playoff teams have to duke it out amongst themselves to make it to that level of the Postseason. Here’s an example, using the current 2020 standings in the American League.

To me, that is a far better format – it rewards winning your division, makes the path to success for a Wild Card much more difficult. If the White Sox win their division with the best record in baseball, and then lose two out of three games to the Indians (who have taken two out of three from them in both series they’ve played this year, including one in Chicago), all that does is renders the entire regular season moot. If the Indians win four elimination games in a row and then bump the White Sox in a five game series, that hurts no less, but reflects far better on the Indians. There would be a feeling that they earned the victory and deserved to advance, rather than finishing in third place and taking two outta three.

I also think the TV viewership talking point for the expanded playoffs misses the larger discussion here. With eight three-game series, four in each league, taking place over a four day period, MLB is going to have overlap with games. If you’ve got eight games going in one day (which is on the schedule in two weeks), the audience is going to cannibalize itself. If two games start at 1 PM on one of these eight-game days, the combined audience for those games isn’t going to double. Fans are going to choose which one to watch, and you’ll get an extra trickle of fans to one game or the other. Instead of putting the maximum amount of eyeballs on each game, all that would happen is that the audience is getting watered down and the average per game audience is lower. That doesn’t even take into account the inevitable rush of day games (which are an absolute bane on viewership when people aren’t working from home) and late evening West Coast first pitches (which only serve to alienate the East Coast viewers).

But hey, this has seemed to be MLB’s mentality under Rob Manfred’s reign as commissioner. Instead of focusing on growing the game, the league is focused on making money for owners and diluting the product. I don’t know about you guys, but I can’t wait for the most inevitable outcome possible to a playoff game – the team with the best record in baseball losing in eight innings after a ghost runner from second base scores thanks in part to a blown call from an umpire that was reviewed and upheld, despite evidence the call should have been overturned.