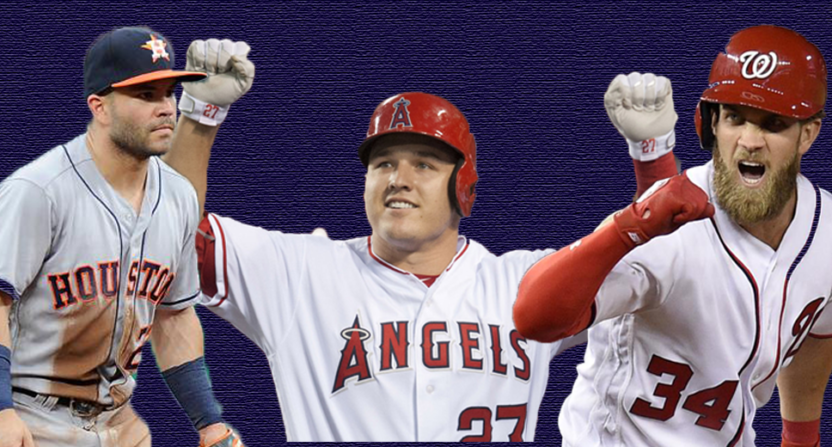 After five sad, sorry baseball-free months, Opening Day has arrived, and we could not be more excited. But before we finally get to watching games, we have to record our predictions so that we can go back and laugh at them come October.

We at The Comeback have already picked our division winners and wild-card teams for the American League and National League, as well as identified important players and storylines to watch. Now it’s time for one last round of educated guesses, on MVP, Cy Young and Rookie of the Year winners, as well as the World Series champions. Here’s what our fearless forecasters foresee playing out over the coming season.

Who will win the American League MVP award?

Judge is coming off a year in which he led the AL in home runs, walks and runs scored. Now, he has Giancarlo Stanton hitting behind him.

The best player in the game and by quite a bit. He nearly led MLB in WAR despite playing only 114 games last year.

Trout was the best player in the AL last year, but he had the unmitigated gall to miss significant time for the first time in his career. If he has another season like 2017 this season, and doesn’t miss time, he’ll moonwalk to the MVP award since the Angels project to be pretty good in 2018.

Alex Putterman: I know it’s no fun to pick Trout here, but have you seen that guy play?

Who will win the National League MVP award?

I’ll take the superstar in his walk year, playing for a gargantuan contract and a team that might have its last best shot at a World Series title.

Bryce Harper. In 2017, Harper had the second-best season of his career. Of course, he missed time (again), but with his free agency coming after this season, I expect a monster season and his second MVP award.

I see the Cubs having a big year, and if they do, Bryant should be back in the spotlight after fading from view in 2016 despite great numbers.

Who will win the American League Cy Young award?

Sale arguably could’ve won this last season, but faltered down the stretch. That won’t happen this year.

I was one of those people that thought Verlander was toast after a disappointing 2014 and an injury-laden 2015. He’s been awesome the last two years, and I think a full season in Houston could result in him putting together a season even better than his Cy Young *and* MVP-winning 2011.

Kluber is so steady, so durable and so damn good. Given how reliably Chris Sale seems to fall off in the second half, Klubot is the clear choice for me.

Who will win the National League Cy Young award?

Greinke was outstanding last season and he may be the difference between the DBacks contending or falling back to the pack.

The Greg Maddux comps have turned out to not be too crazy. The Dartmouth product has a career 2.94 ERA in 590 innings (2.53 over the last two seasons), and has added a new curveball this spring.

Kyle Hendricks striking out Alcides Escobar on three pitches is a thing of absolute beauty. pic.twitter.com/LI8fdINCLq

I can’t count on Clayton Kershaw to give the Dodgers 30 starts anymore. Scherzer has won the last two NL Cy Young awards and has been an absolute horse for the Nationals. I don’t see that changing, especially in what will likely be a pivotal year for the Nationals franchise.

Obviously, Kershaw’s back and the Dodgers’ aggressiveness with the disabled list make me nervous, but I still believe Kershaw is the best pitcher in baseball, and 30 starts should be enough to win him this award once again.

Who will win the American League Rookie of Year award?

Torres, Willie Calhoun and Francisco Mejia will each begin the season in the minors. But Torres has a starting position waiting for him once he’s called up.

Even with the question marks and spring struggles, I’d still bet on him to be a 3-WAR starter, and anything he adds with the bat is a bonus.

I’m not too sold on Ohtani winning AL ROY, but he’s likely going to be given every chance to succeed in the majors this season. Given those opportunities and what looks like a weak rookie crop, I’ll give him the edge.

Ohtani’s Spring Training performance makes me nervous, but he’ll have so many chance, so much hype and such a compelling narrative.

Who will win the National League Rookie of Year award?

I know I’m getting in line here, but Acuna getting called up is a formality and reportedly turning down a long-term deal is a big bet on himself. It’ll pay off.

We’re fortunate to have as many young stars as we do in the game right now, and Acuna will only add to that. The 20-year-old is a special talent.

SWERVE! I think Ronald Acuna is going to be an incredible player, but he’s starting the year in the minors, and Brian Snitker is a shitty manager who seems likely to bench him during his first cold spell. Kingery will start the season in the majors for the Phillies, and will be in the lineup nearly every day at a variety of positions.

Kingery is significantly older than Acuna and will likely finish the season with more at-bats. That’s enough for him to get my contrarian vote here.

Who will win the World Series? Over whom?

If you are into betting on baseball, you can make your predictions as well!

Last season was a lesson in maintaining focus for the Cubs. The Astros will return to the World Series, but the Cubs’ pitching will ultimately give them the edge.

The winners of the last two World Series titles appear — to me, anyway — to be the best teams in their respective leagues entering 2018.

Houston is clearly the best team in baseball, and while every NL team is flawed in some way, I think the Cubs emerge from the mess.

Year after year, the Dodgers win the NL West and enter the playoffs as a World Series favorite, and year after year they fall short. That can’t continue forever… right?