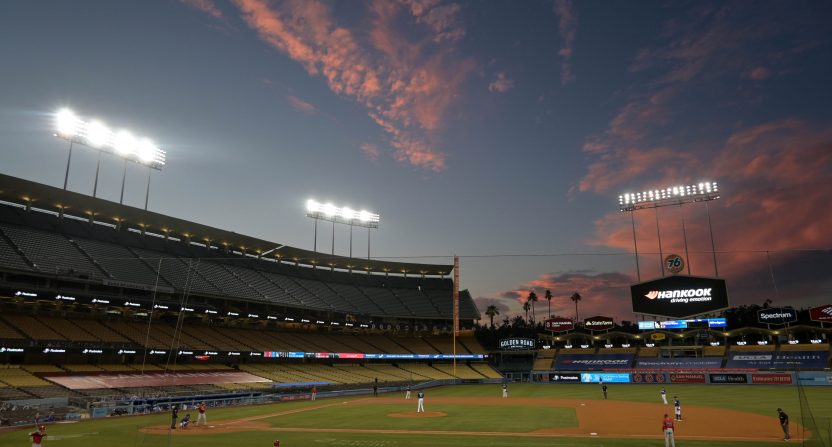 The NBA and NHL have each done a tremendous job containing COVID-19 in their bubbles, while MLB has seen outbreaks within the Miami Marlins (didn’t play for eight straight days) and St. Louis Cardinals (last played on July 29; postponed through at least Thursday) organizations. Naturally, MLB is concerned about such an outbreak happening in the postseason, and they’re reportedly considering a bubble format.

ESPN’s Jeff Passan reports that MLB “has had preliminary discussions” about holding the postseason in a bubble format.

Major League Baseball has had preliminary discussions about holding its postseason in a bubble-type format, sources familiar with the conversations told ESPN.

Early details on why MLB is embracing the bubble and what it could look like, at ESPN: https://t.co/kHgBuVEqp9

Last week, one team president put it very clearly: "Our only chance is to start planning a postseason bubble." While the talks are preliminary, as @BillShaikin reported earlier, they're real, and they've got a significant amount of backing around the sport.

Passan reports that “a multicity format that replicates the NHL’s Toronto and Edmonton hubs has gained traction, sources said.” He adds that MLB would need three hubs for the 16-team Wild Card round, and would shrink to two hubs for the Division Series.

Because of MLB’s expansion to 16 playoff teams, the league would need at least three hubs to complete its wild-card round before shrinking to a two-hub format for the division series. The league championship series and World Series could be held at one or two stadiums. Remaining in one metropolitan area would allow teams to avoid air travel and perhaps remain at a single hotel for the entire postseason, which is scheduled to begin Sept. 27.

So, what cities would be in play for the hub locations? Passan reports that “Southern California, the greater Chicago area and the New York metropolitan area make the most sense because of the available stadiums.”

Southern California, the greater Chicago area and the New York metropolitan area make the most sense because of the available stadiums, sources said. Concerns about weather in late September and deep into October make the Los Angeles area the most logical choice to host an entire postseason, though the sources cautioned that because of the nascent nature of discussions, no favorite has emerged.

A bubble was considered for the MLB regular season, but it ended up not being very feasible due to so many games needed to be played (by 30 teams with 30-man rosters), to go with preferred locations Arizona and Florida — home of the Grapefruit and Cactus Leagues — being COVID-19 hotspots ahead of the season. Star MLB players such as Mike Trout and Clayton Kershaw also voiced their concerns on the bubble idea.

But for a one-month postseason, a bubble format really makes sense, especially if multiple locations can serve as hubs. If the Marlins or Cardinals situations seem bad now, imagine how much of a nightmare it would be for MLB to have the same thing happen in the postseason. The league needs to do everything possible to prevent that, and a bubble would help the chances to do so.