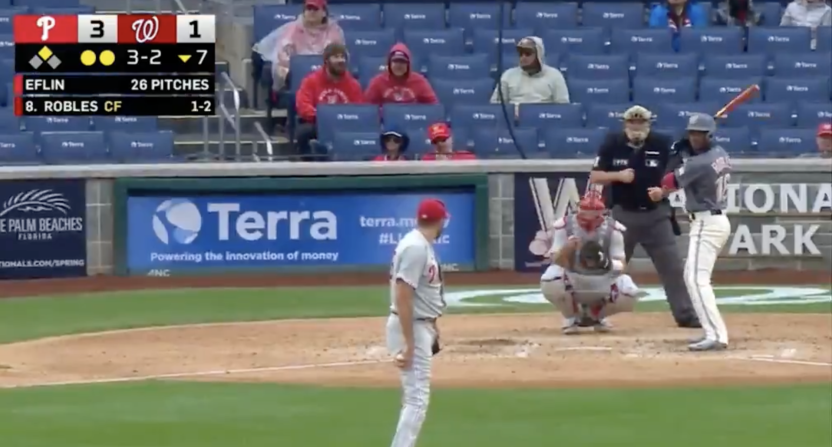 According to the most basic of Major League Baseball rules, four balls mean that a batter walks while three strikes mean that the batter strikes out – whichever comes first. But apparently, one MLB umpire got a little confused about that during a game on Friday.

During the seventh inning of Friday afternoon’s game between the Philadelphia Phillies and the Washington Nationals, a chaotic scene on the basepaths led to home plate umpire John Tumpane completely forgetting the count. As a result, Nationals center fielder Victor Robles struck out instead of drawing a two-out walk.

It all started when Nationals second baseman Luis García was picked off at second base while trying to steal third with two outs. The out appeared to end the inning, but after a lengthy discussion, it was ruled that an umpire had called time before the pitch.

As a result, the runner went back to second base and Robles was still alive – except Tumpane completely forgot the count. The count should have been 2-2, but when pitcher Zach Eflin threw two more balls, but he wasn’t awarded third first base. Instead, he stayed in the box and was called out looking on the next pitch to end the inning.

Then the umpire completely forgets the count and Victor Robles strikes out instead of walking pic.twitter.com/XmRdpw2igQ