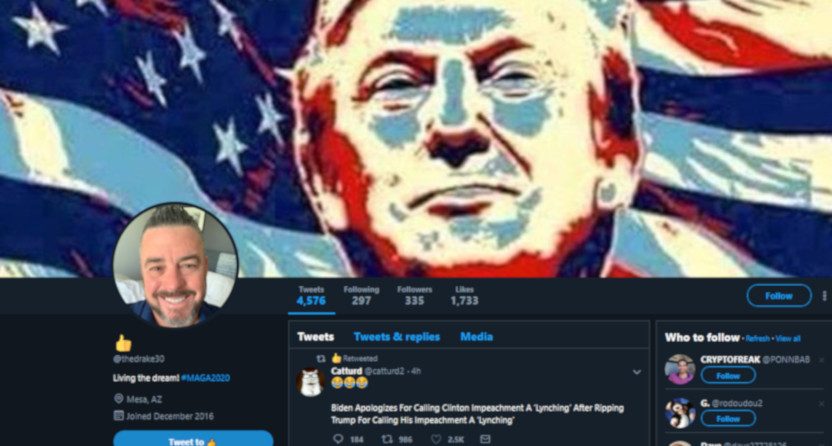 The latest MLB controversy isn’t about the Houston Astros, but rather about long-time MLB umpire Rob Drake. As Jeff Passan of ESPN relayed Wednesday afternoon, Drake is under fire for tweets he sent Tuesday night:

Longtime major league umpire Rob Drake tweeted that he planned to buy an assault rifle “because if you impeach MY PRESIDENT this way, YOU WILL HAVE ANOTHER CIVAL WAR!!! #MAGA2020”, according to a copy of the tweet obtained by ESPN.

The tweet, which was deleted soon after it was posted late Tuesday, followed one earlier in the night regarding the House of Representatives’ impeachment proceedings with President Donald Trump.

The second tweet, which remains active on Drake’s account @thedrake30, says: “You can’t do an impeachment inquiry from the basement of Capital Hill without even a vote! What is going on in this country?”

…A spokesman for Major League Baseball said the league is aware of the tweet and looking into it.

Beyond the sheer lunacy of an established MLB umpire (Drake made his major-league debut in 1999, has been a full-time major league umpire since 2010, and worked postseason games in 2010 and 2012-15) sending out these kinds of tweets threatening apparent violence, it seems worth it to note that someone relied on for interpretation of the complex MLB rule book can’t even spell “civil” in a tweet. And in a further follow-up tweet, he spelled “ridiculous” wrong. He’s since locked his account, but here’s a screenshot:

“Rediculous” indeed. Well, at least that takes some attention away from the various Astros‘ issues, and how they’re still defending assistant GM Brandon Taubman and still haven’t apologized for their “misleading and completely irresponsible” comments on the initial Sports Illustrated story (which have been extensively corroborated at this point). But it raises a whole new issue for MLB to deal with during this World Series, and the World Series itself already hasn’t been doing too well in the ratings…