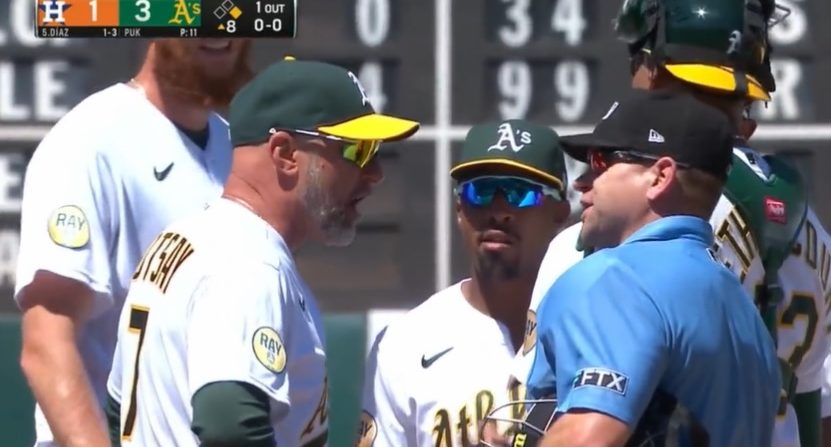 Another chapter in Major League Baseball’s greatest rivalry in 2022 — pitting the players and managers against the umpires — was written on Wednesday.

The Oakland Athletics were hosting the Houston Astros. In the eighth inning, Oakland’s A.J. Puk was pitching against Houston’s Yordan Alvarez and threw what appeared to be strike three. Only, home plate umpire Mike Muchlinski called the pitch a ball. A’s manager Mark Kotsay argued the call, though he did stay in the dugout. Muchlinski did not take Kotsay’s objections lying down.

The umpire just walked over and ejected Mark Kotsay in the middle of a mound meeting pic.twitter.com/xxJcIj0fPC

The umpires have been heavily scrutinized by fans throughout the season. This incident was no different.

@mlb the umps have microphones now. Make it a rule they have to announce EXACTLY why they’re ejecting someone. It’ll cut down on BS ejections real fast https://t.co/HwCXpagWtj

This latest group of "younger" umpires is even worse at their jobs — and more confrontational — than the Angel Hernandezes and Phil Cuzzis of the world.

Viewing this ejection in a vacuum, this is actually one of the easier ones to defend from the umpire’s perspective. First of all, it was a manager, not a player. Ejecting a player can severely mess a team up for not only that game but potentially for games going forward, especially if it’s a pitcher. With a manager, not so much.

Also, Kotsay was likely looking to get tossed. As was made clear during the dispute before the ejection, Kotsay had yelled at Muchlinski twice. He was probably not happy with the strike zone throughout the day and wanted to vent. Kotsay would not be the first manager or coach to intentionally let a conference at the mound run long to get a chance to yell at the umpire.

First of all, while wasn’t as blatant as some other misses that we’ve seen this season, Kotsay appeared to be correct about the call that he was arguing.

Kotsay appeared unhappy with pitch 4 to Alvarez being called a ball. pic.twitter.com/7YYlikN3wC

Secondly, even if Muchlinski’s call was 100% correct and Kotsay was completely in the wrong, why do MLB umpires have such rabbit ears? For all of their flaws, NFL referees don’t react this way to the arguments they hear arguments from the coaches all game. Frequently, those arguments are coming from a coach standing within arm’s reach. Why can they let that go in one ear and out the other, while MLB umpires are too thin-skinned to hear an argument from a few dozen feet away?

This ejection wasn’t as bad as some that we’ve seen in MLB and Minor League Baseball this season — but it did not need to happen. And as more incidents like this and blatant missed calls occur, the calls for Robot Umpires will only increase. If the umpires want to stem those calls, incidents like this need to vanish.

[Welcome to the Ump Show, A’s on NBCS, Matt Kawahara]