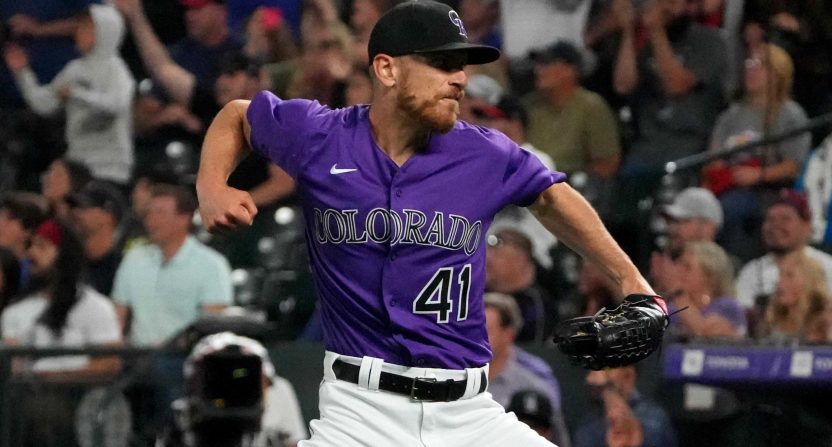 Entering Monday, veteran MLB pitcher Chad Kuhl had never thrown a complete-game shutout in his entire career over 113 games pitched (97 starts). His career-high for innings pitched in a game was 7 1/3.

Kuhl went the distance with nine scoreless innings in the Colorado Rockies‘ 4-0 win over the Los Angeles Dodgers.

The Dodgers only had three hits and one extra-base hit, which was a Gavin Lux double with two outs in the ninth. Kuhl didn’t walk anybody, and he struck out five.

Gotta Kuhl a guy down after he throws a shutout. pic.twitter.com/XAU56FijTG

For context on how hard it’s been to dominate the Dodgers like this in recent years: it’s the first complete-game shutout thrown against the Dodgers since 2016.

Chad Kuhl is the first pitcher to throw a complete-game shutout against the Dodgers since Boston's Steven Wright in 2016. He's the first Rockies pitcher to do so against LA since Ubaldo Jimenez in 2011 (that was at Dodger Stadium).

Chad Kuhl just threw a complete-game shutout against the Dodgers.

First time a pitcher has done that against LA since 2016.

And this was at Coors Field. pic.twitter.com/moOU3dBcvH

And that does it — a complete-game shutout for Chad Kuhl, only the 17th in franchise history, as the #Rockies beat the Dodgers 4-0

Kuhl is yet another former Pittsburgh Pirates pitcher – a la Gerrit Cole, Joe Musgrove, Jameson Taillon, and Tyler Glasnow — that has gone on to having success with a new team. After putting together a 4.44 ERA over five seasons with the Pirates (2016-21), Kuhl now has a 3.49 ERA in 77 1/3 innings pitched with the Rockies this season. It’s rare that pitchers go from struggling to having great success when joining the Rockies, while having to pitch half their games at Coors Field.

Here’s more reaction from the baseball world to Kuhl’s masterpiece:

Dave Roberts on Chad Kuhl's night on the mound against the Dodgers. pic.twitter.com/sW6UuZEYyF

-First since Germán Márquez on June 29, 2021 and the 17th in franchise history
-Fourth Rockies pitcher to allow three or fewer baserunners in a CG SHO
-Used 102 pitches, fourth fewest at Coors Field for a CG SHO

Chad Kuhl was just in the halfway, on a very emotional FaceTime call with his parents back home in Delaware. A complete game has been Kuhl’s goal for as long as he can remember, he said.

Chad Kuhl pitched a complete game at Coors Field on just three hits and the Rockies topped the Dodgers, 4-0. No Colorado starter had finished even the eighth inning this season.