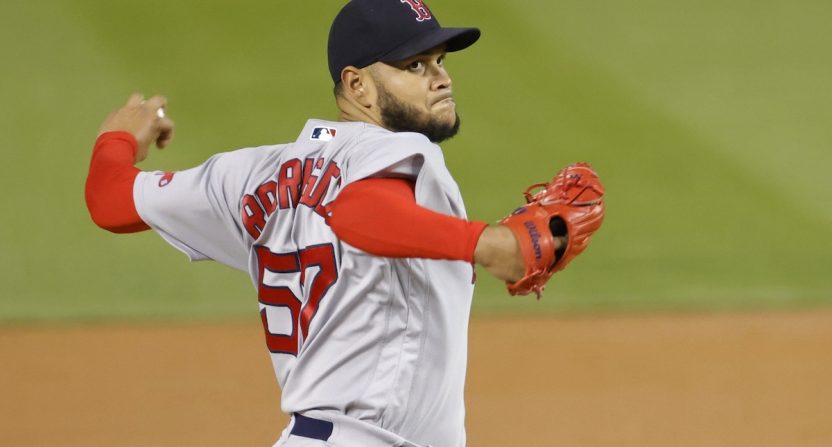 The Detroit Tigers got a jump on a potential free-agent spending freeze and planted a flag for the 2022 Major League Baseball season and beyond. After seven years of rebuilding, with young talent emerging and big contracts getting cleared off the payroll, the Tigers are ready to make a push toward contention again.

Signing free-agent starting pitcher Eduardo Rodriguez is a big step toward competing for a playoff spot. The 28-year-old left-hander agreed to a five-year deal with Detroit. The Athletic’s Tigers beat reporter Cody Stavenhagen first had news of the deal.

Left-hander Eduardo Rodriguez and the Detroit Tigers are in agreement on a five-year deal with between $77 million and $80 million, sources tell ESPN.

According to ESPN’s Jeff Passan, the contract is worth between $77 million and $80 million. MLive’s Evan Petzold reports that Rodriguez could make an additional $3 million in performance bonuses. Additionally, the contract includes an opt-out after the second season and a no-trade clause.

Rodriguez went 13-8 with a 4.74 ERA and 185 strikeouts in 158 2/3 innings (32 appearances, 31 starts) for the Boston Red Sox last season. He was a key part of the Red Sox rotation as Boston made a surprise run at the AL East title, eventually finishing as a wild-card playoff team.

As you would expect, plenty of media covering MLB reacted to Rodriguez signing with the Tigers, led by those who follow the Red Sox. Once Rodriguez turned down a $18.4 million qualifying offer from Boston, however, it was pretty clear that he knew a bigger payday awaited on the open market.

Thought all along Eduardo Rodriguez would get paid — lefty, not a lot of IP, succeeded in AL East, etc. Maybe not $77 million, but good for him considering what he went through in 2020 He's good friends with Miguel Cabrera, too.

Source confirms Eduardo Rodriguez is nearing a five-year deal with the Tigers for $77M plus. The Sox were interested in a reunion – hence the $18.4M qualifying offer for 2022 and past multi-year offers – but now have a hole to fill https://t.co/X6BoTgTZOB via @BostonGlobe

Rodriguez has a 64-39 record and 4.16 ERA in six major-league seasons, averaging 9.4 strikeouts per nine innings. Those numbers may not be eye-popping, and Rodriguez wasn’t the best starting pitcher available on the free-agent market. But Detroit isn’t paying top-tier salary either. Rodriguez’s $16 million average annual salary slots him toward the lower end of the top 20 starting pitchers in MLB.

More importantly, he’s an excellent fit for a Detroit starting staff. Rodriguez provides a veteran arm at the top of the Tigers’ rotation, taking some pressure off Casey Mize to be the No. 1 starter.

Eduardo Rodriguez’s peripherals were pretty good, which is why many outlets had him as a top-15 free agent (I didn’t), and which is why he had significant interest. His ERA was high, but the Red Sox ranked last in turning balls in play into outs, according to @mlbtraderumors.

Eduardo Rodriguez has the 3rd highest projected fWAR among all starters available this off-season. This *could* be a pretty significant bargain. pic.twitter.com/MB0TSPHueD

A top three of Rodriguez, Mize, and Tarik Skubal (164 Ks in 149 1/3 innings) should be competitive with Matt Manning and perhaps Elvin Rodriguez filling out those final two spots. Matthew Boyd (flexor tendon surgery) and Spencer Turnbull (Tommy John surgery) probably won’t be expected to contribute until the latter part of the season, at best.

Tigers are one team interested in Carlos Correa, whose 7.0 WAR ranks him 3rd in AL. Set himself up nicely. Rangers, Yankees, Twins among others teams likely in an alltime great SS market. In Detroit, there’s an AJ Hinch link.

This isn’t expected to be the Tigers’ only jump into the free-agent pool. MLB reporters, analysts, and fans expect that the team will take a run at one of the top available players, notably shortstop Carlos Correa. Detroit has a need at shortstop and a fanbase eager for its team to make a big move after being sold a rebuilding project for years.

If you take nothing else from today’s #Tigers signing of Eduardo Rodriguez, it at least means Chris Ilitch is keeping his word — finally. With a shortstop and another signing or two, Detroit is very likely to spend more than $200M this off-season.

The New York Yankees and New York Mets could certainly have something to say about Correa going to Detroit. But as the Detroit News‘s Tony Paul said in the tweet above, the Tigers have bided their time while trimming a bloated payroll and developing young players.

The expectation throughout the MLB world is that the waiting is over in Detroit. No. 1 draft pick Spencer Torkelson (30 home runs on his path from high Single-A to Triple-A this year) and outfield prospect Riley Greene (24 HR from Double-A to Triple-A) appear ready to join the major-league roster this coming season.

This might not be the last time we write about the Tigers making an impactful, splashy free-agent signing during this offseason. They just got a head start on the competition before the sport likely shuts down for a while.