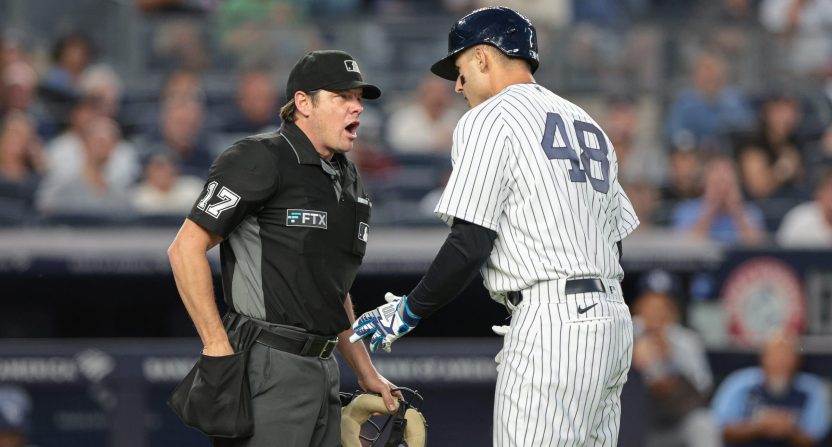 Anthony Rizzo has been on quite a downslide at the plate the past 17 games. Having gone 12-for-60 with five home runs and 12 strikeouts prior to taking the field Monday against the Tampa Bay Rays, his frustrations boiled over after a questionable call from the home plate umpire.

During Rizzo’s at-bat in the bottom of the third inning, the New York Yankees’ first baseman was hit in the thigh on a slider from Ryan Yarbrough. As Rizzo trotted his way towards first, believing he would be walked, the home plate umpire D.J. Reyburn surprisingly called him back after claiming Rizzo didn’t “make enough effort” to get out of the way of the ball.

Clearly upset with the call, Rizzo kept his cool and remained in the batter’s box.

Disagreement after Rizzo gets plunked pic.twitter.com/hxg00m12Xb

After striking out and heading into the dugout, YES Network cameras caught the first basemen smashing his helmet into a row of shelves before walking to the other side.

This is rare out of Rizzo pic.twitter.com/EN9m33RimJ

It doesn’t take the world’s best lipreader to figure out what Rizzo was saying in the dugout.

I don't even attend the monthly lipreading workshops that @Jomboy_ leads in the office but I think I know what Rizz said here pic.twitter.com/QsK6Q6cD0X

Rizzo remained in the game, where he picked up his 18th double of the season off Rays opener Jalen Beeks.

Baseball fans on Twitter naturally reacted to the unusual call from the umpire, with some agreeing with the call and others, not so much.

That ump calling Rizzo back for leaning into a hbp has huge stones. Good for him.

The umpire is right. When the ball was on the way to the plate, Rizzo should've simply disappeared/evaporated. https://t.co/NjAQV7Q9Ry

Look at that another umpire that is power hungry and a small man, makes a horrible call on Rizzo. Where is he supposed to go

Rizzo looks like an angry Italian dad about to yell at his kids pic.twitter.com/5YTiOIGn6a

Anthony Rizzo when he sees an inside slider. pic.twitter.com/QbGvg8Jir0

Although the rule is rarely enforced, the ump’s decision was technically correct according to the MLB rulebook.

Despite holding a commanding 10-game lead in the AL East, New York has gone 3-10 in their last 13 games dating back to July 31.