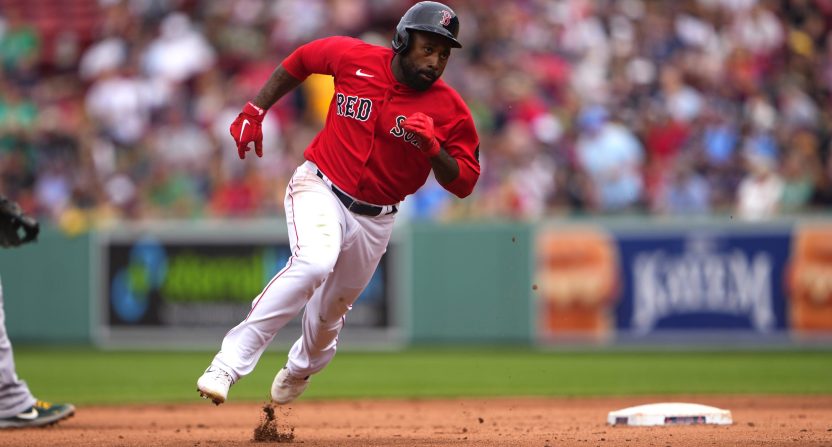 Just hours after reports surfaced that they would designate Jackie Bradley Jr. for assignment, the Boston Red Sox have decided to release the outfielder instead.

Bradley’s second stint with the Red Sox won’t be as notable as his first. He spent the first eight seasons of his MLB career in Boston where he won ALCS MVP, a Gold Glove award, and the World Series in 2018. Bradley became a fan favorite among the Red Sox fanbase during this time and when the Red Sox traded for Bradley after he spent one season with the Milwaukee Brewers, he was welcomed back to Fenway.

That comeback was short lived now that Bradley has been released. In 91 games, Bradley had a .210 batting average with 2 home runs and 29 RBI. Not great numbers offensively but his defensive abilities have made up for that over the years.

Many had thoughts about Bradley’s release. From those pointing out that the Red Sox traded away Hunter Renfroe for someone they wound up releasing halfway through a season to fans of other teams wanting their team to sign Bradley, the MLB world was abuzz.

The Red Sox essentially traded Hunter Renfroe for someone who was released midseason. https://t.co/5fAxuxCjYB

Count that trade a big win for Stearns. https://t.co/0vRcVzuc5s

Some contender is going to get an elite defensive outfielder for the postseason.

The Blue Jays make a lot of sense if they want to replace Zimmer.

Bruh. I would have released 5 other ppl before him.. tbh #RedSox #Dirtywater https://t.co/VBz1o6SBhy

Dodgers will take a flyer https://t.co/cd1q5TnPuq

Probably one of the easiest players to like and cheer for. https://t.co/nvBFL2ICUu

He’s going back to Milwaukee and I’m bout to laugh https://t.co/aChekVJwL1