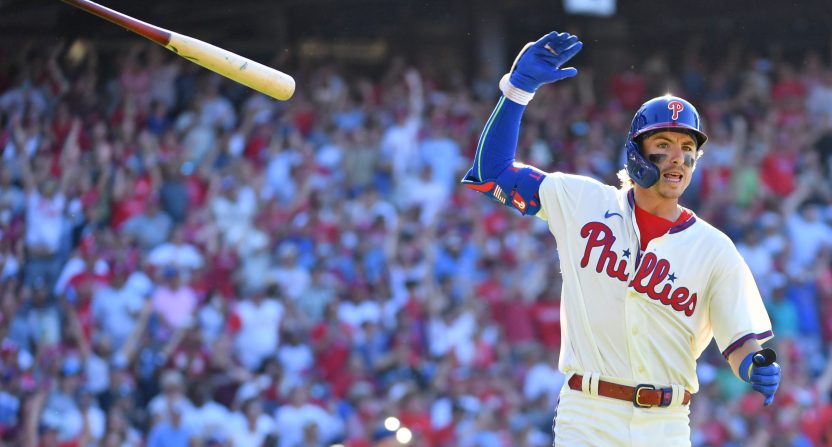 The Philadelphia Phillies and Los Angeles Angels just played one of the wildest games we’ll see in the 2022 MLB season, with the Phillies coming away with a 9-7 walk-off victory on Sunday.

In the top of the ninth, the Angels got the lead back on an RBI single from Matt Duffy. While certainly a tough play, it was one that could’ve been made — or at least kept in the infield — by first baseman Rhys Hoskins and served as an example of the plays the Phillies’ defense has struggled to make this season.

So it seemed like the Angels may still win after all, and especially after they maintained the lead with two outs in the bottom of the ninth. Again, it was a full count. And again, the Phillies came through with a dinger.

After a highly disappointing 21-29 start to the season, the Phillies have now won four in a row to get to 25-29. Philadelphia fired manager Joe Girardi earlier in the week.

The Angels, meanwhile, are freefalling. Sunday’s loss is the ELEVENTH STRAIGHT for the Angels.

Joe Maddon on if he's worried this streak will derail the season:

"Of course you're concerned. It was going so well. And it's almost like we turned the spigot off. It's hard to explain. 10 days ago we were on top of the world, and now we're paddling upstream."

This one surely hurts the most and must have some soul-searching going on in the Angels’ locker room. Incredibly, despite the 11-game losing streak, they’re still only one game under .500 at 27-28. But the Angels’ fan base surely has a “Here we go again” feeling for a team that last made the playoffs in 2014, despite three AL MVP award winners since then (Mike Trout twice, and Shohei Ohtani in 2021). The Angels haven’t even finished .500 or better since 2015.

The baseball world has had plenty to say about the Phillies’ walk-off victory:

The #Phillies scored 26 runs in Joe Girardi's final 6 games; they had a 1-5 record.
The Phillies have scored 26 runs since naming Rob Thomson manager. They are 3-0.

Here is the thing about Bryce Harper, he has 9 more years on that contract, there is no one else employed by the Phillies organization that needs their young players to be good more than him. He is going to outlast everyone else.

This little kids reaction is everything. Phillies sweep the Angels. pic.twitter.com/MN5bb0T3wP

Tired: The Angels season is over, they’ve lost 11 straight games and Mike Trout looks like he forgot how to hit

Wired: The Angels are currently in the third Wild Card spot on June 5