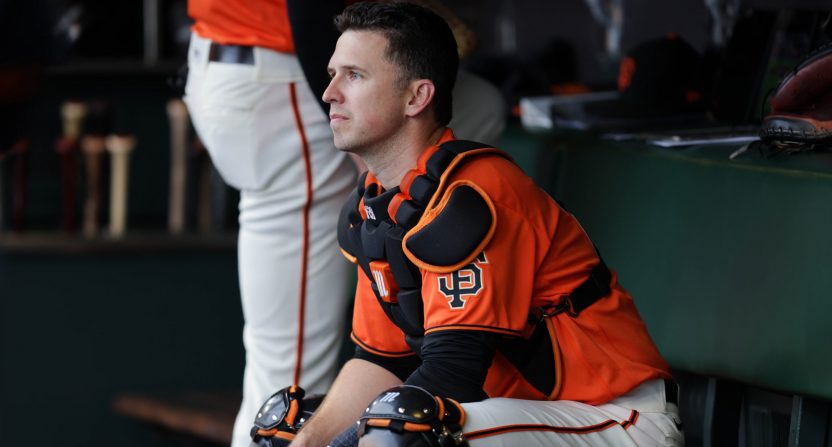 The MLB offseason is just getting underway after the Atlanta Braves won the World Series less than 24 hours ago, and there’s already massive, stunning news in the baseball world.

San Francisco Giants catcher Buster Posey will announce his retirement from baseball on Thursday, according to Giants beat writer Andrew Baggarly of The Athletic.

Buster Posey is indeed retiring. On the Hall scale, he’s somewhere between Roy Campanella and Thurman Munson but much closer to Campy and should get in. 3 titles. A Rookie of the Year. A batting title. An MVP. A rule change. Tremendous hitter and leader.

Posey is a seven-time All-Star, three-time World Series champion, and he won the NL MVP and batting title in 2012. He’s also a two-time NL Comeback Player of the Year, including in 2021.

And that last factoid is what makes this news so shocking. Posey is coming off a sensational 2021 season in which he had a .304/.390/.499 slash line and was worth 4.9. wins above replacement per FanGraphs- the highest WAR for a catcher in baseball this season.

The 34-year-old clearly has plenty of excellent baseball ability left, but he’s seemingly decided to hang it up. Maybe he wants to go out at a high level while still his body is still feeling well enough at a treacherous, physically demanding catcher position. Maybe it’s related to a personal matter or he just wants to spend more time with his family. Maybe it’s an entirely different reason altogether.

Whatever the case, Posey is seemingly retiring, and that’s a huge loss for both the Giants (winners of an MLB-best 107 games this season) and the game of baseball.

Congrats to Posey on an amazing career.

And here’s a sampling of the reaction to the Posey retirement news:

Buster Posey after Game 5 when asked about his future: "I'm definitely just going to take some time with my wife, talk to her, and I'll be able to be a full-time dad of four kids for the first time in a while. Yeah, just kind of take it slowly and see how things progress."

if that is indeed his final year, it's one of the best offensive final seasons ever

Posey will slot in 7th — and what a list!!! pic.twitter.com/ny6Kg9a6kp

Buster Posey retiring maybe shouldn't be as big a shocker as it feels like right now given that he already sat out a year recently… but still: Total shocker.

There is no tweet or sentiment that can encapsulate what Buster Posey meant to Giants fans. He is irreplaceable and legendary. A true champion and a Giants lifer. I still remember the excitement in 2008 when he got drafted and in 2010 it was clear he was generational. WHAT A RUN.

I just … don’t know … baseball without Buster Posey? I …

Buster Posey Forever. For absolutely ever.

I remember seeing Buster Posey highlights from when he was at Florida State and my jaw hitting the floor.

He was one of the first players I idolized growing up, and one of the consistent superstars during his era. Enjoy retirement Buster! pic.twitter.com/pr4I73CnSm