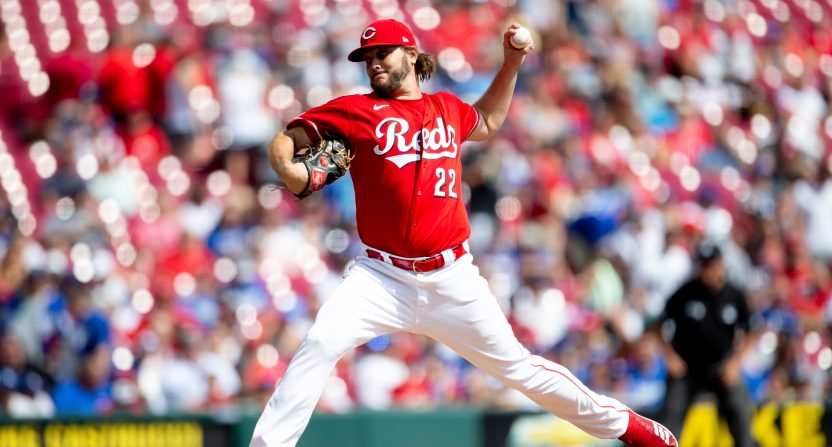 The #Cubs today claimed LHP Wade Miley off waivers from the Reds. pic.twitter.com/nTOI0TKCP1

Nobody saw this one coming.

Miley — who turns 35 on Nov. 13 — is coming off a 2021 season in which he had a 3.37 ERA in 167 innings, and that’s while pitching home games in an extremely hitter-friendly stadium at Great American Ball Park. He was worth 5.7 wins above replacement (WAR) per Baseball Reference, good for the fourth-best mark for pitchers in the National League. Miley’s 2021 season was the third time in four years that he put together a sub-4 ERA, and the only time he didn’t was a tiny 14 1/3-inning sample in 2020.

He even threw a no-hitter in May.

And the Reds decided he wasn’t worth paying $10 million over one season.

The Cubs have made it clear that they’re going to be aggressive for starting pitching help this offseason, and they surely didn’t expect Miley to fall into their lap at a bargain price just a few days after the season ended. And they steal a valuable piece from an NL Central rival team in the process.

For what it’s worth, the Reds claim that they tried to trade Miley and didn’t find any buyers.

Reds' Nick Krall on Wade Miley: "We tried to trade him the last couple of weeks and didn't have a buyer"

And they claim that they will at least make a Qualifying Offer for free-agent bat Nick Castellanos.

Here’s a sampling of how the baseball world reacted to the Miley news:

So… back of the envelope math, and you can correct me if I'm wrong:

The 6 #Reds players on guaranteed contracts for 2022 account for $72.5 million in payroll and combined for a 4.4 bWAR

Cubs pitching coach Tommy Hottovy on the addition of Wade Miley to the rotation picture… pic.twitter.com/gwccMT6SSg

Nice pickup at $10 million for one year. https://t.co/ZQpSw2P5cO

Division rival Cubs score a coup by claiming Wade Miley off waivers from Reds. Cincinnati obviously is desperate to save money but why not pick up his $10M option and trade him? Had 6 WAR this year. Confounding!

Someone explain to me how Wade Miley at 1/$10M doesn't have positive trade value and the Reds needed to try and save on the $1M buyout.

Then explain to me how Arizona, Pittsburgh, Washington, and Miami passed on him. https://t.co/G1RXXEV3q9

Wade Miley was worth nearly 6 bWAR in 2021. If players like that are being waived to save $1 million — just his buyout! they could have declined his option instead! — then the game is in a rough spot.

Wade Miley threw 163 innings of 3.37 ERA ball and the Reds just straight up let him get claimed on waivers https://t.co/BcNxHbfISd

What the Reds are doing right now is going to be exhibit A for the players in labor negotiations.

Wade Miley was without question one of the top 30 or so pitchers in baseball this year and probably better. They just waived him to save $10m. Good lord.

are the reds ok?

The Cubs getting Wade Miley on waivers at 1/10 is a good indication that the Cubs' cynical long-term ploy might work out great: that being moderately cheap still leaves you the big dog in a division full of *really* cheap.

So I’m to understand that Cincinnati had a guy who just put up a 3.37 ERA over 163 innings under club control for a $10 million club option for next year and they just…put him on waivers? For nothing? No compensation, just vibes (and ‘financial flexibility’)?

They saved $1 million Fabian. And if that’s not enough savings to justify letting go someone who threw a no hitter, I don’t know what is

If I'm understanding the move here, the Reds literally gave Wade Miley away so they wouldn't have to pay him $1M to go pitch somewhere else.

Wade Miley likely doesn't repeat a 2.9 fWAR season in 2022 and the 4-seam only sits at 89.9mph, but his cutter (which he throws 46.6%) was unlucky. His cutter xwOBA and xSLG suggested he should have had more success with the pitch. Cubs are pretty strong with adjusting cutters.

With Wade Miley in the fold and arb estimates for Happ/Contreras, I have the #Cubs payroll around $85M including a full 40-man and player benefits/insurance. pic.twitter.com/HWujtwcVvw