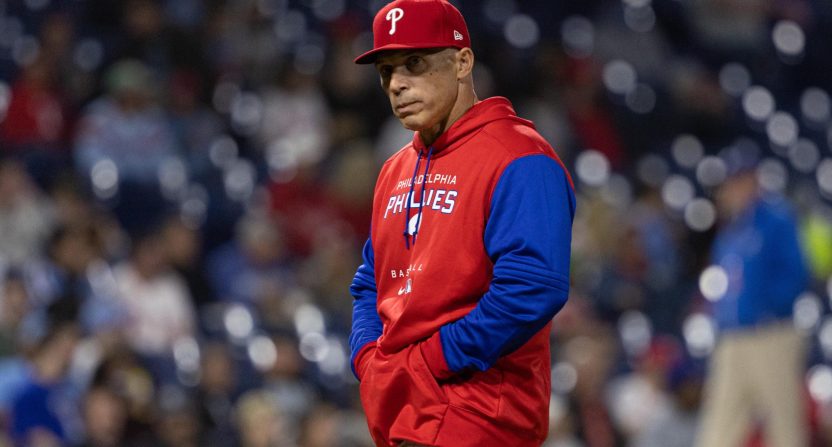 The Philadelphia Phillies invested big with the signings of Kyle Schwarber and Nick Castellanos but that hasn’t exactly translated into wins. Entering the third month of the season, the Phillies are 22-29 and are five-and-a-half games back of the Wild Card spots.

It’s that time of the season where enough games have been played to know how the season is going and before the trade deadline where teams have to decide whether or not to fish or cut bait. If the Phillies are to make a change, this is the time to do it and they did just that by relieving manager Joe Girardi of his duties.

In their statement, the Phillies revealed that bench coach Rob Thomson will be the interim manger for the rest of the season while coaching assistant Bobby Meacham was let go as well.

The Phillies have relieved Joe Girardi of his duties as manager today. Bench coach Rob Thomson has been named interim manager for the club through the end of the 2022 season. In addition, coaching assistant Bobby Meacham was also relieved of his duties. pic.twitter.com/lVL60RrSnJ

Girardi managed three seasons for the Phillies but only had a full season with the team in 2021. There, the team went 82-80 and failed to make the playoffs. For a manager who won the World Series and went to the ALCS four times with the New York Yankees, this had to have been a bit underwhelming for the Phillies.

Many people had thoughts about the move including Phillies fans and local Philadelphia media.

The Phillies fired Joe Girardi and named Rob Thomson interim manager for the remainder of the season. President Dave Dombrowski said they needed a “new voice” to turn around what has been one of the most disappointing teams in baseball at 22-29. They went internal for that voice.

THE PHILLIES HAVE FIRED JOE GIRARDI.

Joe Girardi out as Phillies manager? It’s a shame we never got a repeat of the Girardi and Showalter beef in the NL East. pic.twitter.com/rreuIfPuak

Joe Girardi and Doc Rivers are the same guy.

Joe Girardi had to go. Team's under performance, combined with his poor handling of bullpen, lack of energy & failure to press the right buttons made it all inevitable.

I was a huge fan of his hiring, but it’s time to admit he is a bust.

Everywhere Dave Dombrowski goes he builds a bullpen that can only be described as an affront to God but sure, Joe Girardi was the problem https://t.co/LuBHmvb5Ht

Joe Girardi was a disaster, and almost never put the Phillies in at advantage during games. There was no reason to keep him, especially with his option for 2023 already declined. It’s about time.

We know Joe Girardi wasn’t the Phillies only problem, but he was definitely one of them. Keeping him around wasn’t doing them any good.

Philly teams went all-in on veteran coaches over the past few years. Let's check in on them now: