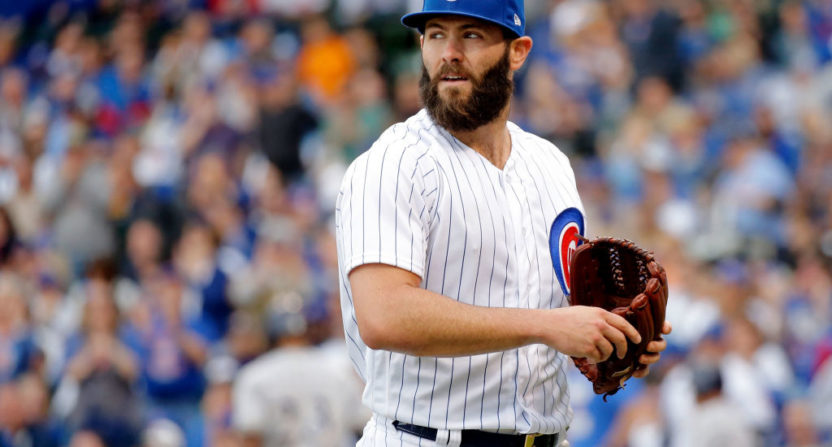 According to a few reports, the MLBPA is getting ready to start a spring training of sorts for unsigned free agents. We first heard this was a possibility a couple of weeks ago, and the new information comes amidst the union’s accusations of wrongdoing on the part of major league teams, which is the MLBPA’s theory as to why so many players remain without contracts despite pitchers and catchers reporting next week.

From Brown’s report at Yahoo:

With 30 camps set to open early next week and an unusual number of players still without contracts – some among the top free agents on the market – the union is investigating sites in Florida and Arizona in case it determines a 31st camp is necessary. The IMG baseball academy in Bradenton, Florida, was believed to be among at least three options. The union also is identifying coaches and other personnel to staff the facility.

Should it come to fruition, the arrangement is likely to draw comparisons to a spring camp held in Homestead, Florida, 22 years ago during the last work stoppage in Major League Baseball history. Dozens of unsigned players waited out the strike by preparing at the sports complex, dubbed “Camp Collusion.” Many signed contracts when the strike ended in the spring of 1995. Some did not.

If the union actually does go through with this, it will be one of the biggest self-owns in sports. The current CBA was negotiated in November of 2016, and even considering how widely it was panned at the time for needlessly ceding ground to ownership across the board, it really is shocking how quickly things have devolved.

This faux-spring training is a transparent attempt to pacify union membership. But had the MLBPA put even half as much effort into their CBA negotiations all of 14 months ago we might not be sitting here now, with league spending lower than it has been since a literal recession:

Despite being as rich as ever, MLB teams have stopped spending money in free agency this season. The last time baseball was this cheap, it was during the 2008-2009 recession. What's going on? (via @baseballpro) https://t.co/6GcVpdoXtW pic.twitter.com/I4ZNiSVhI9

What possible benefit could players have by showing up at a non-sanctioned camp? Why risk injury at this point when teams are already clearly not interested in veteran players, at least not at what had been and what should still be fair market rates, given the unprecedented influx of revenue into the sport?

The union trying to put something like this together is laughable, and only reveals just how deeply they failed at the negotiating table the last time around. The NBA and NFL both have salary caps, which does, in theory, limit some spending. The best players in the NBA, for example, are clearly underpaid relative to their on-court value thanks to contracts having maximums.

The best players in baseball, however, are also clearly underpaid relative to their on-field value, even when they do eventually reach free agency (which by default is a longer road than NBA players, who at least reach some form of restricted free agency after four years).

But both the NFL and NBA have collective bargaining agreements that guarantee players a certain percentage of their respective league income; for both leagues, it comes in just under 50%.

Been told the union is considering starting a camp as soon as Tuesday — the day pitchers and catchers report to some team sites. Some prominent players still have not been informed, and it’s unclear just how many would participate. One free agent told me he’d rather stay home. https://t.co/CSFEUlmr2Y

Baseball has no such guarantee. That means players are at the whims of owners, despite already operating in an artificially depressed marketplace and working with more and more restrictions (caps on amateur and international spending, in recent years, along with harsher luxury tax penalties for teams and draft pick compensation being tied to free agent signings).

Nathaniel Grow has written a few indispensable pieces on the subject for Fangraphs, and his piece in 2015 on declining player revenue looks prophetic now. In it, he points out that by his estimates, the player’s share of revenue had fallen from 56% in 2002 to around 40% in 2015. That’s astounding, considering the sport on the whole has seen revenues increase greatly in that span.

And now, we’re seeing the natural conclusion: owners are making money from a combination of television deals and revenue sharing and that aforementioned $50 million payment from MLB’s sale of BAMTech (which the league has argued shouldn’t be considered as sport-related revenue, which is hilarious). They don’t need the marginal boost a somewhat competitive team gives them over a non-competitive team. The current slate of general managers, working from the Cubs and Astros blueprint, view that as an endorsement to lose 90+ games without worrying about their jobs, as long as they’re building towards something.

The teams that are competing, then, face less competition for high-end free agents, while also likely viewing the difference between, say, 93 and 98 wins as meaningless, given the random nature of the postseason. That means those players are stuck without the payday they’ve been promised by the system they came up through, and that trickles down through the remaining unsigned players as well.

The MLBPA, meanwhile, is trying to organize a glorified day camp at the last minute, which will likely be sparsely attended and will certainly accomplish absolutely nothing of consequence for its membership. That seems to be their specialty.