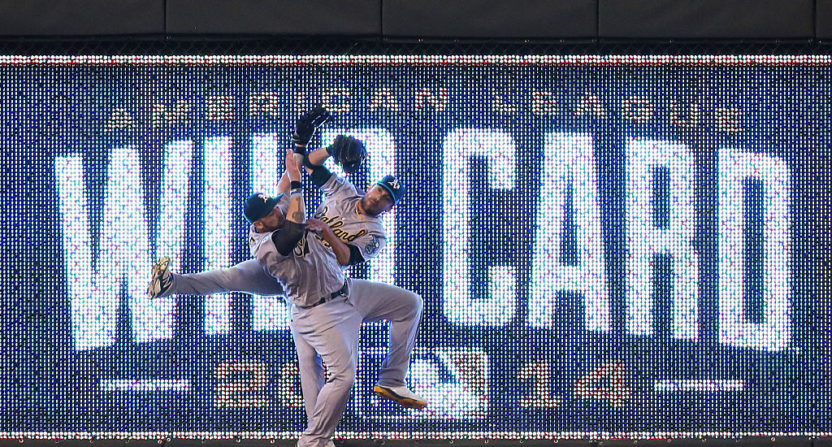 We’re now in the sixth season of Major League Baseball’s double-wild-card format. Every year since 2012, the two best non-division-winning teams in each league have played a one-game playoff to determine who moves on to the Division Series. The arrangement has all sorts of pros and cons relating to competitive balance, late-season drama and underlying fairness, leading to strong opinions all around about whether the good outweighs the bad.

Having seen the two-wild card set-up play out for more than half a decade now, we asked our staff to assess whether the format is working. Here are their responses:

Jay Rigdon: I think it’s working. No matter which system you use, there are going to be years where another system may have worked to create more excitement, but it’s hard to look at the current setup as a bad thing. It does keep more teams involved in the playoff picture, by definition, and those one-game playoff nights are some of baseball’s best theater.

It also does create an incentive to win the division. Is it the fairest way to decide things? Probably not; in any one game of baseball, the best team and the worst team aren’t all that different. A team could have a fantastic regular season and have good separation in the standings over the second wild-card team and end up bounced in one game. But hey, the playoffs inherently exist to create exciting, dramatic moments, not to allow for the automatic coronation of the most deserving teams. May as well embrace that.

Ian Casselberry: I love the double-wild card format and the one-game playoff created for it. Teams often have to use their best pitchers, losing them for a possible Game 1 in the divisional playoffs. Games have to be managed differently. I also like how the wild-card format provides more incentive to win a division. Don’t want a season to “unfairly” come down to one game? Then don’t get into the playoffs as a wild card.

I get why some people—Pittsburgh Pirates fans, for instance—may not care for the do-or-die nature of the wild card setup. There is certainly an argument to be made that a one-game playoff doesn’t reflect what made a team successful during the regular season. And the wild card race probably allows too many teams to maintain the charade of being playoff contenders late in the season. Yet I think the excitement of a one-game playoff supersedes those issues.

Deesha Thosar: There is a discrepancy between the double-wild card game and baseball. For the entirety of a season, baseball is set up as a series. Match-ups last for three, sometimes four, days. It’s comforting to know that even if your team blew it in that first game, Max Scherzer has the series finale. Splits are fine. Sweeps are viciously exciting. This system translates into the playoffs. Best three-out-five. Best five-out-seven. Paced stamina.

Now, all of a sudden the double-wild card game calls for winner-take-all baseball. Throw all your cards onto the table. One game. One shot. Except, there are teams without a clear-cut ace, lacking a dependable bullpen, searching for a slugger. Teams whixh, despite all that, find ways to win. But in the one-game playoff commotion, a fantastic team for 162 games can have a crap-shoot ending in one. Feasibly, keeping the matchup format, but changing the wild card from an all-or-nothing game to a best two-out-three series will solve some of the weirdness. We’re just used to plots.

Matt Clapp: I still can’t decide how much I like the two Wild Cards. I’m a big believer in the better team being rewarded. Say the WC1 wins 96 games, and the WC2 wins 88 games. And then the WC2 beats the WC1 in the one-game playoff. That’s very unfair to the WC1, as they have absolutely been the better team over 162 games, and baseball should in no way be judged by one game.

Then again, 2015 was an example of the two Wild Cards being a good thing. The NL Central featured three teams with at least 97 wins; the Pirates were the WC1 with 98 wins and the Cubs were the WC2 with 97 wins. Those were the three best records in baseball! One of them being completely left out would’ve been quite lame. Of course, the Pirates would argue that it was even more lame that they won 98 games and had to face a historically red-hot pitcher in Jake Arrieta.

Again, one game deciding anything in baseball flat-out sucks. I’d prefer they find a way to make it a three-game play-in, but that’s of course difficult with scheduling. And because of the scheduling issues, Theo Epstein said in 2015 that he proposed the idea of a three-game playoff which included a doubleheader for two of the three games to make things easier. This would also be a very weird way to decide the Wild Card winner, but in my opinion it still beats just one game in deciding the more Division Series representative.

Whatever the case, what we think doesn’t matter. What matters is how it’s working out for MLB, and it’s working tremendously. Look at the AL Wild Card race right now. There are NINE teams (including the two currently leading the race) within four games for two spots. Several teams have a legitimate playoff shot because of the second Wild Card, and this means much more fan interest. Fans of the teams in the race will go out to the ballpark into deep September. Baseball fans that generally don’t even care about those teams will be following these games just because pennant races are compelling. Then the one-game playoff is fantastic drama, must-see TV for people that aren’t even big baseball fans. In general, it’s all more eyes on the game, more discussion on social media/TV/radio, and more money. This all makes it a success for MLB, regardless of whether or not we think it’s the best way to be handled.

Alex Putterman: The double-wild card creates a whole lot of positive outcomes for Major League Baseball. It incentivizes teams to win their divisions. It keeps more fans engaged deeper into the season. It gives us two dramatic nights of baseball right at the start of the playoffs. I liked this idea when MLB first instituted it, and I still like it today.

The most common gripe about this format is that one game is not enough to determine which of two baseball teams is superior. But you know what? Neither is five games or seven games. If the goal of MLB’s postseason were to reward the best team, the Dodgers would be crowned now and we’d skip the whole October exercise. The playoffs are for drama, and the wild-card game creates drama. Yes, we’ll soon see a 96-win team lose to an 86-win team in the one-game playoff. But we sometimes see 96-win teams lose to 86-win teams in the later rounds of the playoffs as well. For most of baseball history, a 96-win second-place team went home after the regular season. If you don’t win your division, you’re lucky to be invited to the postseason tournament at all.

I think the wild-card game is a perfect way of solving several problems at once. It restores drama to divisional races, as no one wants to leave their fate to a single game. It disadvantages wild-card teams in the playoffs, as they have already burned their best pitchers in the play-in game. It keeps fans hoping (and therefore watching) deep into the summer, as their teams hang around the wild-card hunt. And it gives baseball an extra boost of excitement, making heroes out of Christian Colon and Conor Gillaspie.