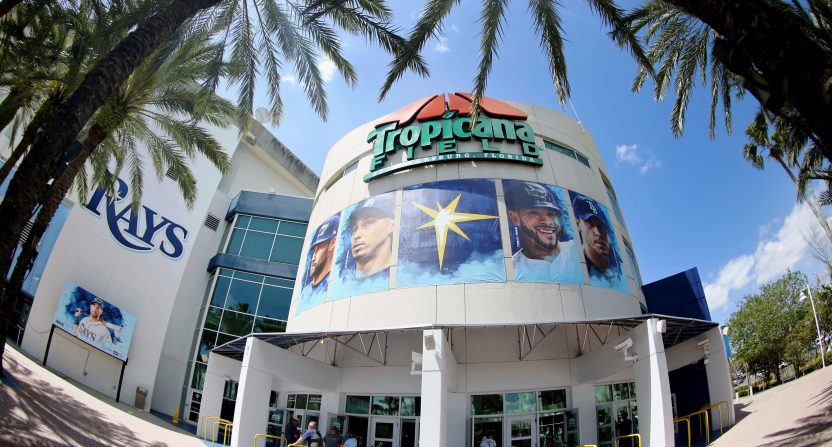 Major League Baseball doesn’t know what the hell to do with the Tampa Bay Rays, who barely draw flies to Tropicana Field no matter what their record is. This year, the Rays are 43-31 and rank second to last in baseball in average attendance, bringing in 14,545 people per game. Last year, they went 90-72 and ranked….second to last in baseball in attendance, averaging 14,258 fans per game. In the team’s 22-year history (including 2019), they’ve drawn over two million fans once: in their debut season of 1998. They haven’t crossed the 1.5 million fan mark since 2013, their last playoff appearance.

First off, imagine being a player on the Tampareal Rayspos. Not only do you need to find a home in the Tampa area, you also need to find one in Montreal (which, as I hope you’re aware, is in another country), a good 1,500 miles away from the Tampa Bay area. In addition to all of the other issues players deal with during the regular season, imagine knowing that halfway through, you’re going to need to move your family to another country. God forbid you make your plans ahead of the season and you’re demoted to the minors, released, or traded before the second half of the season starts. And how in the hell is that going to work with DL stints? If you’re hurt in the first half and rehabbing with the Florida-based Rays, but you’re not ready until sometime in the second half of the year, are you just going to stay in Florida rehabbing, away from your coaches and teammates now in Montreal?

How about if you’re a free agent? Are you going to even consider signing with this franchise, knowing that you’re going to have to move in the middle of the season? And how about guys looking for one-year deals: are they going to be fine knowing that they could be traded a week or two after settling in Montreal after the first half of the year in Tampa?

Imagine being a fan of the Rayspos. If you’re in Florida, why would you care about the first half games, knowing that those crucial second half games are going to be seen by a completely different set of home fans? Why would you buy season tickets, since there isn’t even the possibility of seeing playoff games at your local stadium? And for fans in Montreal, are you even going to bother showing up for second half games if the Rayspos are off to a 30-51 start to the year and are 15 games out in the AL East? The cool part about the start of the season is that every team has hope. If that hope simply does not exist, who is going to show up and cheer their hearts out?

There’s also the stadium issue. MLB wants new stadia in both markets. That means two markets (again, in two countries) likely subsidizing the hell out of land and construction costs (because god forbid a sports team owner pay for the whole damn thing on their own) for 40 home games a year. I am never going to support public funding for stadia, but I can at least understand it if we’re talking about 81 games a year over a six month period. If we’re talking about 40 games over three months, with most of the other costs remaining about the same, what are we really doing here? It makes no sense at all.