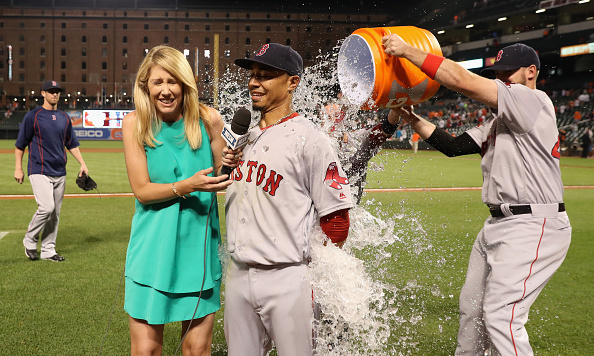 The Boston Red Sox offense is simply on another plane of existence this season, and Tuesday night was just another instance of this potent lineup flexing its collective muscle. The Red Sox topped the Baltimore Orioles 6-2 in clash of the AL East’s top two teams, but the night was about more than Boston extending its division lead.

Let’s start with outfielder Mookie Betts. The 23-year-old wunderkind is already a force in his second full season with the big league club, and he is only getting scarier by the day. Not only is the Red Sox leadoff man a prolific base stealer, he’s demonstrating quite a bit of pop with his bat too. Betts hit not one, not two, but three home runs Tuesday night — becoming the first leadoff batter to do so in team history.

Mookie Betts is the 1st player in Red Sox history to have a 3-HR game out of the leadoff spot (via @EliasSports) pic.twitter.com/VTIFE72c0w

Betts is hitting .283 on the season, and now has 12 home runs to go along with 40 RBI and 8 stolen bases. Despite his diminutive stature (he is listed at 5-9 and 180 lbs.), his early-season power stroke places him amongst the league’s best.

If that was not enough, Betts showed he is more than just an offensive threat. Turns out, he is pretty damn good in the field too.

Meanwhile, Betts’ teammate Xander Bogaerts keeps cranking out the hits. The shortstop extended his hitting streak to 24 games with a single in the seventh inning. This is of course on the heels of center fielder Jackie Bradley Jr.’s 29-game hit streak that ended last week.

Bogaerts’ average is now all the way up to an American League-high of .354. Only the Nationals Daniel Murphy (.395) is hitting at a better clip.

Did I mention he is also just 23 years old?

However, Boston’s league-best offense is due to more than a simple youth movement. Sure, Betts, Bogaerts, Bradley and third baseman Travis Shaw are all under 27, but the team is also getting significant contributions from its veterans. 32-year-olds Hanley Ramirez and Dustin Pedroia are hitting .295 and .309, respectively, and 40-year-old David Ortiz is hitting as well as he has at any point in his career.

It makes sense then, that the team is leading the league in runs scored, batting average, and slugging percentage, and is second to only the Cubs (and just barely) in on-base percentage.

The major question facing the team is pitching. Ace David Price is sure to rebound from an ugly start and his fielding independent numbers suggest he is pitching nearly two runs better than his 5.11 ERA would suggest.

Steven Wright’s emergence has been a massive boost in light of Price’s woes, and Rick Porcello has pitched well if unspectacular. Joe Kelly and Clay Buchholz have been massive weak points, but tonight’s return of Eduardo Rodriguez from the disabled list pushes the latter to the bullpen and should help solidify a shaky rotation.

It may be an #EvenYear, but look out for the Red Sox come October. Boston has quietly formed into an unstoppable offensive juggernaut, and their pitching will only get better from here.