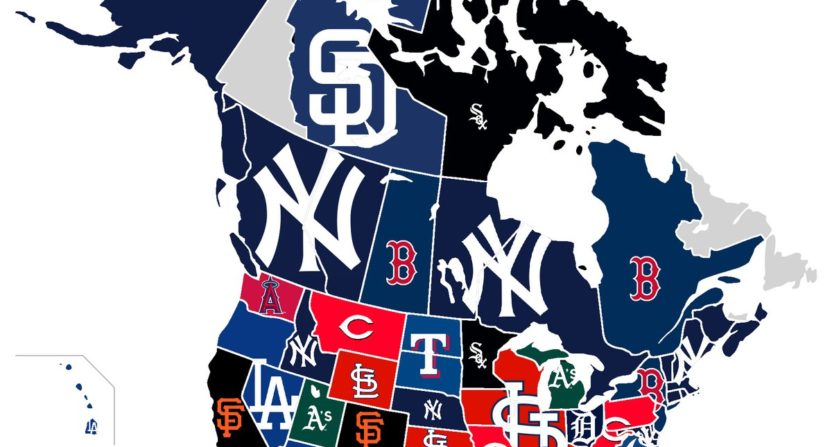 We all love things like this. A map that shows which state loves or hates something and then we can all debate what was right, what was wrong and what left us confused.

This particular map shows the most hated MLB team by US state and Canadian province. While some places, like the Red Sox being hated in New York and the Yankees being hated in New England, make sense, others have left me perplexed.

Most hated MLB teams by each state pic.twitter.com/hR7tU2fCFK

First off, why exactly does Northwest Territories hate the Padres and Nunavut hate the White Sox? I mean, maybe there were some Cubs fans in Nunavut but the Padres just makes no sense. Who would hate the Padres? They don’t really have a rival and are nearing toward 50 years as a franchise with two World Series appearances and zero wins. Just seems like rubbing salt on the wounds of the hard luck Padres by hating them.

The rest of Canada either hates the Yankees or Red Sox and given their popularity and success, that would make sense.

In the Western United States, most states are either hating on popular teams like the Yankees and Cardinals or they are hating on a rival. The Reds in Montana and A’s in Utah seem a bit out of place but it makes sense for the most part.

The middle part of the United States has some unique choices for hated teams. For one, North and South Dakota both go for the Texas Rangers for some reason, while Oklahoma is going with the Giants. The most perplexing one is that Missouri hates the Reds most. I get that the Reds are a rival to the Cardinals but I would have thought they would be hating the Cubs more. The Cubs surprisingly only claim Arkansas as the only state who hates them most.

In addition to Missouri, the Reds are hated in West Virginia and Pennsylvania. And while I get that those two states consist of many Pirates fans, I would have thought they would hate either the Cardinals or Cubs. Or in PA’s case, maybe one of the Phillies’ rivals.

The A’s in Michigan is a bit strange but other than that and WV and PA, everything else in the East seems to make sense. I have to imagine there wasn’t that large of a sample size which affected the results of some states. You never know if someone in Billings hated the Reds because Johnny Bench wouldn’t take a picture or something and now the entire state of Montana hates the Reds. So some of these results should be taken with a grain of salt. Doesn’t mean it isn’t interesting.