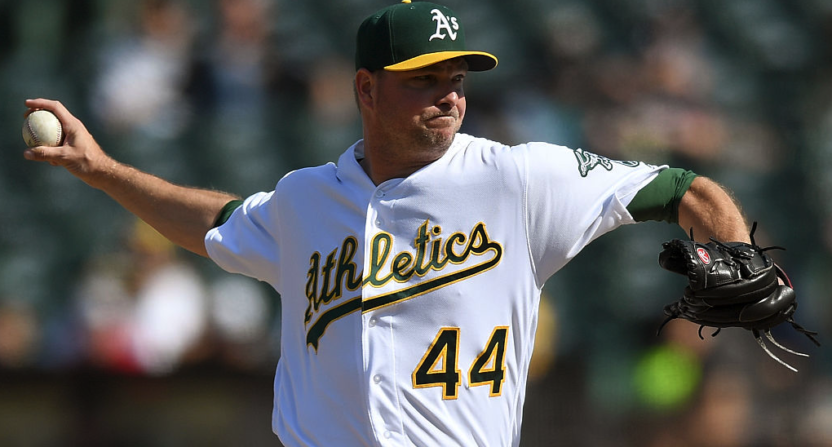 As impressive as the Washington Nationals have been in compiling the second-best record in the National League (54-36 going into Sunday’s play, resulting in a 9.5 first-place lead in the NL East), their shoddy bullpen looked to be a significant obstacle in the postseason.

General manager Mike Rizzo finally addressed that concern on Sunday. The Nationals acquired relievers Ryan Madson and Sean Doolittle from the Oakland Athletics in exchange for three players. Reliever Blake Treinen, who began the season as Washington’s closer, is on his way out West along with minor league pitcher Jesus Luzardo and third baseman Sheldon Neuse.

Fox Sports’ Ken Rosenthal was the first to report news of the trade.

Sources: #Nationals acquiring Doolittle and Madson from #Athletics for Treinen and two prospects.

Upgrading the bullpen was absolutely crucial for the Nationals, who have the worst reliever ERA in the major leagues at 5.34. Opposing batters are also hitting .280 with an .825 OPS against Nats relievers, both the worst marks in MLB. Washington just never recovered from losing closer Mark Melancon to free agency and trying to replace him in-house had disastrous results, while also affecting the depth of the overall bullpen.

Treinen got the first shot at ninth-inning duties, but faltered from nearly the very beginning. Though he notched three saves in his first four appearances of the season, the right-hander also allowed three runs and five hits in 3.1 innings. By mid-April, manager Dusty Baker took Treinen out of the closer role, intending to use Shawn Kelley and Koda Glover depending on match-ups. But that didn’t work well either, and the Nats have been seeking a closer ever since.

Rizzo has often favored an experienced closer, and Madson provides one who is plenty familiar with getting the final three outs of a game. In 2011, he saved 32 games for the Phillies, while striking out 62 batters in 60.1 innings. He underwent Tommy John surgery in Spring 2012 and was out of baseball until 2015 when he signed with the Royals. After showing he could be an effective late-inning reliever again, Madson signed a three-year deal with the A’s and racked up 30 saves for them last season.

The A’s opted for Santiago Casilla as their closer this season, but Madson has pitched well, compiling a 2.09 ERA with 39 strikeouts in 39.1 innings.

Left-hander Doolittle also has closing experience, having saved 22 games (with 89 strikeouts in 62.2 innings) in 2014. He underwent shoulder surgery the following season, but has been a reliable reliever for Oakland during the past two seasons. This year, he has a 3.31 ERA with 31 strikeouts in 21.1 innings.

By my math, Nats adding more than $5 mil in pro-rated salary this year, nearly $12 mil next. Big add, by their standards.

Perhaps even more important for the Nationals is that Madson and Doolittle won’t be half-season rentals. Doolittle signed a five-year, $10.5 million extension in 2014 that has him under contract through 2020. Madson is also signed for next season. That adds another $28 million or so to the team’s payroll, but that’s less than the $62 million the San Francisco Giants paid Melancon in free agency.

By taking on more money, the Nats also didn’t have to trade a top prospect like Erick Fedde, Victor Robles or Juan Soto. Neuse and Luzardo were not considered among Washington’s top 10 minor leaguers. Neuse, a third baseman, was batting .291 with an .818 OPS for Class A Hagerstown this season. Luzardo, who underwent Tommy John surgery last year, has three starts in the rookie Gulf Coast League.