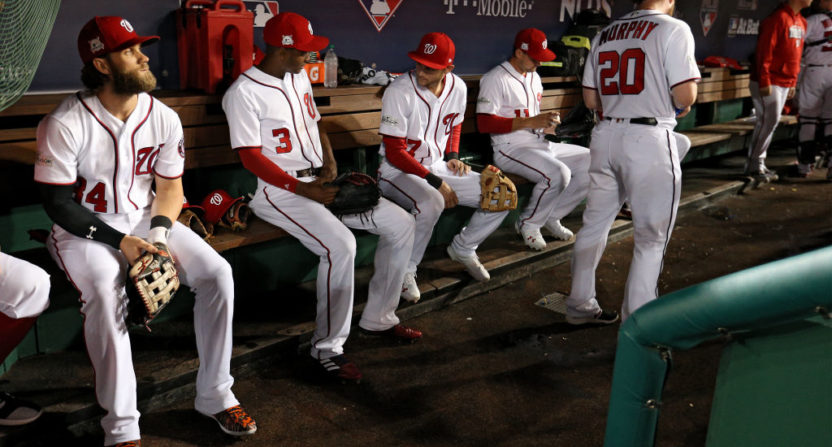 After yet another painful Postseason exit, the whispers around the Washington Nationals grew louder – the team would have one more year to win a championship before their window shut for the foreseeable future.

But is that really accurate?

The Nationals have 11 free agents this offseason, which is quite a hefty number. But the only offensive starter leaving is left fielder Jayson Werth, who slashed .226/.322/.393 in 70 games this year. Also on the offensive side, the Nats will lose a handful of backups – Alejandro De Aza, Stephen Drew, Howie Kendrick, Jose Lobaton, and Ryan Raburn, though none would command hefty salaries and could easily be brought back if the team so desired. Adam Lind also has a $5.8 million mutual option for the 2018 season.

On the pitching side of things, there’s no turnover in the rotation, which will bring back its top four starters in 2018. The bullpen will take some hits, losing Matt Albers, Joe Blanton, trade deadline acquisition Brandon Kintzler, and Oliver Perez. Edwin Jackson, the team’s fifth starter for half the season, also departs, but he is far from a key member of the team.

So in all, Washington will retain its top five starters (which includes Joe Ross, who will miss the start of the season recovering from Tommy John surgery), four of its top five relievers (including the injured Koda Glover), and seven of eight offensive starters (assuming that middling catcher Matt Wieters exercises his $10.5 million player option for 2018). Given the sorry state of the NL East, you can already pencil the Nationals in for another division title.

Bryce Harper’s free agency is the most pressing issue that the team will face, given that he’s been their best hitter for nearly every season of his career. Daniel Murphy’s three-year, $37.5 million contract also expires after 2018, as does Ryan Madson’s three-year, $22 million deal and injured reliever Shawn Kelley’s three-year, $15 million deal. 2018 will also be the final year under team control for Gio Gonzalez, whose $12 million option for 2018 vested in September.

If the Nationals do nothing of substance this offseason (which, given their history, would be a surprise), here’s what their team would look like.

Sure, that roster isn’t as good as the one the Nationals rolled out in 2017 and the roster it’ll probably roll out in 2018…but it still isn’t bad, especially since the NL East might still be in its constant rebuild in 2019.

After 2019 is when things will get hazy. Stephen Strasburg can opt out of his seven-year, $175 million contract. Ryan Zimmerman could also be gone, given that he has an $18 million club option for the 2020 season. Anthony Rendon is scheduled to hit free agency, as is Tanner Roark. The core of the team could effectively be dwindled down to Turner, the three outfielders, and a 36-year old Max Scherzer.

So while the Nationals’ hopes of contending will take a hit in 2019, it’s really in 2020 where the team could struggle going forward. That is, unless the team is able to re-sign Rendon or is able to keep Harper in DC as a National for life. If either (or incredibly, both) of those things happen, the Nationals could stretch on into the better part of the next decade – and maybe they’ll finally end up winning a playoff series along the way.