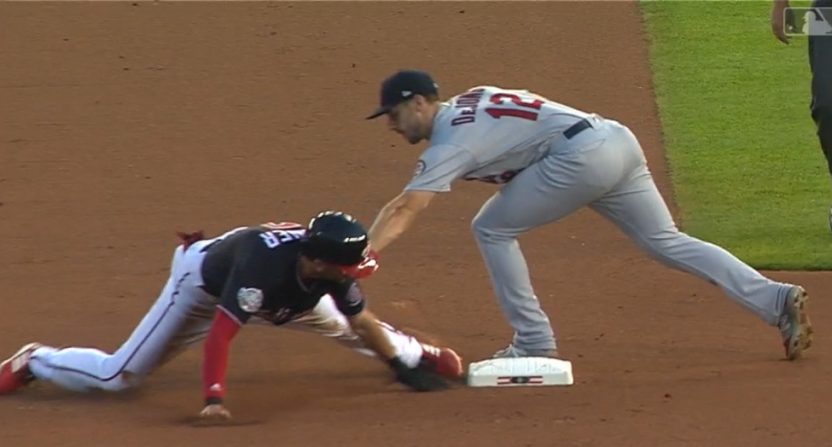 Baseball often has the capacity to surprise, and boy, did it do that Tuesday when Washington Nationals’ shortstop Trea Turner wound up being called out following a walk. In the first inning, Turner earned a walk of his own against St. Louis Cardinals’ pitcher John Gant, and he then took off in an attempt to steal second on the 3-2 pitch to Bryce Harper. Harper took that pitch and it was called a ball, producing a walk, so Turner was allowed to take second base.

However, Harper’s slide saw his foot come off the bag, and St. Louis shortstop Paul DeJong kept the tag on him. While Turner was called safe on the field, that call was reversed on replay, with his slide past the bag ruled as trying to advance to third:

That’s likely to be further ammunition for the many who complain about replay being used to catch players off the bag for fractions of a second. And even some of those fine with that may have a problem with a player being called out on a walk for “trying to advance to third” when he clearly was doing nothing of the sort. (And yes, Turner could have made this moot with a better slide that kept his foot on the bag, but still.) But that’s how this one was ruled, and it certainly was an interesting situation. And it’s not something you’ll see every day…

1 thought on “Nationals’ shortstop Trea Turner called out after…advancing to second on a walk?”