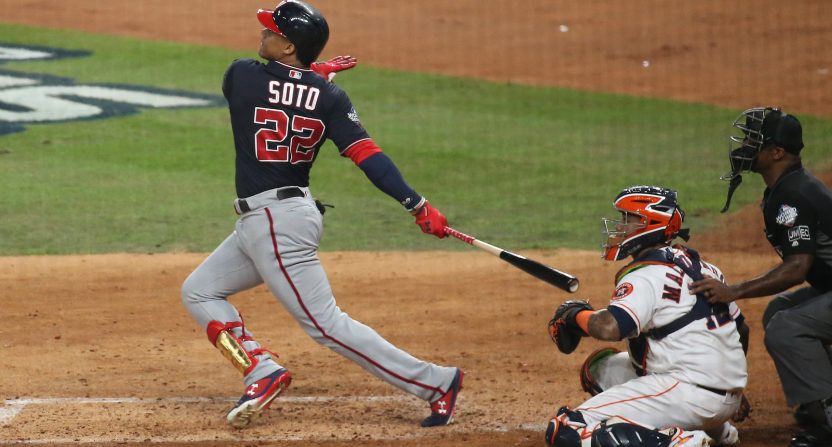 The Washington Nationals and New York Yankees kick off the 2020 Major League Baseball season at 7 p.m. ET on Thursday night at Nats Park. However, even though MLB will try to complete its 60-game season (and postseason, whatever format that will be), we’re still in a pandemic.

And a big reminder that the pandemic is still very much a thing comes with news that Nats star outfielder Juan Soto has tested positive for COVID-19, according to ESPN’s Jeff Passan.

MASN’s Mark Zuckerman confirms the news, and adds that Soto is asymptomatic.

Confirming @JeffPassan's report that Juan Soto has tested positive for COVID-19. Told by a source that Soto "is OK." He already spent the first 2 weeks of camp in mandatory quarantine after coming into contact with someone who tested positive.

Rizzo says Soto is asymptomatic. Has tested negative multiple times throughout last several weeks, but can't be cleared until he tests negative again.

Rizzo said Soto was tested 2 days ago, got the result early this morning. He'll need to test negative twice over a span of more than 24 hours to be cleared. That's MLB/CDC protocol, isn't subject to D.C. laws. Rizzo said contact tracing doesn't prevent anyone else from playing.

So, the good news is that Soto appears to be okay.

But this is a very ugly situation for MLB. Soto is arguably the best position player on either the Nats or Yankees, and we learn just hours before Opening Night that he can’t even be a part of it because he has the virus that caused this whole shutdown. Yikes. For people arguing that MLB shouldn’t be returning, this news certainly boosts that argument.

The Nats may be without Soto for multiple weeks, and that’s a huge loss for the defending champs, especially in a 60-game season. Soto is a ridiculous hitting talent — with a tremendous plate approach — that has put together a .287/.403/.535 slash line in 1,153 career plate appearances. That’s at the age of 19 and 20 in the majors. And he carried it over to the 2019 postseason, cranking three dingers and putting together a 1.178 OPS in the World Series.

Washington entered Thursday as very slight NL East favorites according to FanGraphs, but with the Atlanta Braves, New York Mets, and Philadelphia Phillies all very close behind.  And that’s while projecting Soto to have the third-highest OPS in baseball.