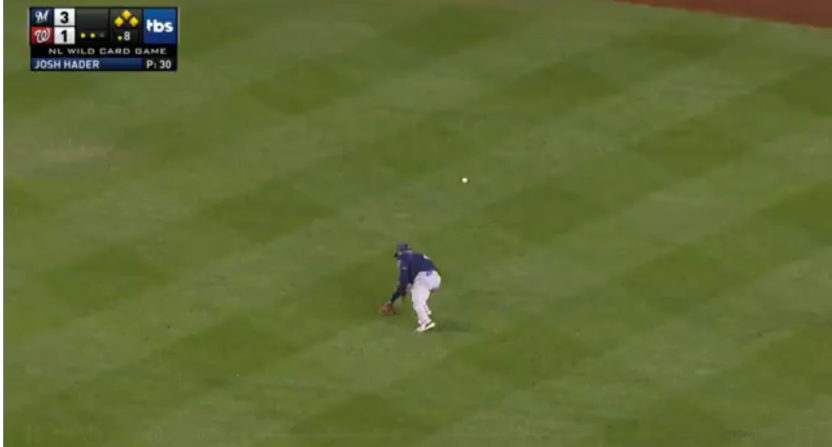 Tuesday night’s NL Wild Card Game appeared to be another very quick and extremely disappointing postseason exit for the Washington Nationals, until the eighth inning came along.

The Nats had only been able to score one run against Milwaukee Brewers pitching through seven innings, but put three on the board in the bottom of the eighth to take a 4-3 lead vs Milwaukee relief ace Josh Hader. However, only two of those runs were earned; the third run scored thanks to a brutal error from Milwaukee rookie outfielder Trent Grisham.

With the bases loaded and two outs in the bottom of the eighth, Washington 20-year-old star Juan Soto ripped a single into right field. It was quite likely going to at least score two runs to tie the game 3-3, but Grisham completely whiffed on the ball in right field to allow the go-ahead run to score.

In the top of the ninth with Lorenzo Cain on first base and two outs, Nats reliever Daniel Hudson got Ben Gamel to fly out (though to deep center field) to put the Nats in the NLDS with a 4-3 victory.

For the Brewers, this is a really unfortunate way to end what was an unbelievable run after losing superstar Christian Yelich to a season-ending injury in September. While this loss has to be incredibly frustrating due to the game appearing to be in great shape entering the eighth inning, they have nothing to hang their heads about. For the second consecutive year, Craig Counsell’s squad maxed out their talent and played remarkable baseball down the stretch.

For the Nats, it’s a huge exhale for the organization and fans.

And the Nats’ celebration will be short-lived, with a five-game series against the juggernaut Dodgers set to begin on Thursday in Los Angeles. Additionally, Max Scherzer (5 IP, 77 pitches) and Stephen Strasburg (3 IP, 34 pitches) both pitched on Tuesday night, so it’s likely they aren’t available until Games 3 and 4 of the series (however, the Nats have a third frontline starter in southpaw Patrick Corbin).

So, the NLDS will be a highly difficult challenge for the Nats, but they just had to do everything they could to get there and take their chances. They accomplished that on Tuesday night, in very dramatic fashion.