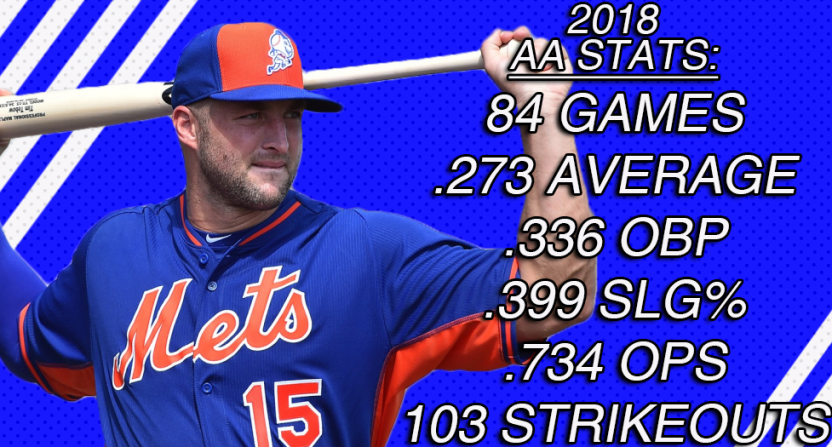 For most people, being 31 and hitting .273/.336/.399 with 103 strikeouts and six home runs as a left fielder with the double-A Binghamton Rumble Ponies might be a sign to give up on major league dreams, or at least start working towards coaching or broadcasting. For Tim Tebow, that’s apparently cause for promotion. Yes, the Tebowmania seen in spring training is somehow still a thing, and the “Tim Tebow homered on the first pitch he saw at AA, and I guess we’re doing this shit again this year” headline our Joe Lucia wrote in April has proven prophetic, as we’re still doing this shit.

New Mets’ general manager Brodie Van Wagenen easily could have written off the Tebow experiment (which has also included Tebow only playing in limited games at times to indulge his broadcasting side gig over at ESPN, where he’s becoming quite the hot take artist) s a product of the former regime. Instead, he told MLB Network’s Jon Morosi to expect to see a promotion for Tebow next year:

Tim Tebow is likely to begin 2019 at Triple-A, but new #Mets GM Brodie Van Wagenen did not rule out the possibility that he could make the @MLB Opening Day roster. Tebow has fully healed from hamate injury, Van Wagenen said. @MLBNetwork

Again, Tebow is 31, and he’ll be 32 in August. He’s already on the bad side of the baseball aging curve. And the projections for him in the majors are not good:

“Better than Chris Davis in 2018” is an incredibly low bar, considering that he had the worst MLB season ever by batting average (.161). But hey, at least Tebow isn’t owed $161 million more across four years, unlike Davis. Still, there are very few baseball reasons to promote Tebow to Triple-A, much less the majors. Seven players who played over 40 games for the Rumble Ponies posted a higher OPS in 2018 than Tebow’s .734, and most of them (excepting first basemen Peter Alonso and Joey Terdoslavich) played more premium defensive positions.

Tebow’s most remarkable stat in the 84 games he played was his strikeouts (103, second on the team), and he didn’t have the power to make up for them (his six home runs tied him for seventh). He doesn’t get on base, he doesn’t hit for power, and he doesn’t have the glove to compensate for those shortcomings. And yet, the Mets’ new GM not only thinks he’s worthy of a promotion, but might even be worthy of their MLB roster. That inspired a whole lot of criticism, especially from WFAN’s Mike Francesa (who already had one fiery run-in with Van Wagenen):

When you talk Tim Tebow and opening day roster in same sentence. Then I can't take an agent turned GM seriously.

Here’s a transcription of the key bit, starting around 0:35:

Francesa then goes on to mix up Tebow’s 2017 stats with his 2018 ones (before later correcting himself), which we’ll just ignore for now, but he wraps up with a “You’re telling us you’re going to put this guy on your major-league roster on Opening Day? Who are you kidding? Do you want us to take you seriously or not? …Clown statements like that, we’re not going to take you seriously.” And it’s hard to disagree with him here.

There seems to be absolutely zero baseball reason to promote Tebow, but hey, the sideshow might sell a few tickets, as it has at the lower levels. And that’s perhaps been the Mets’ logic all along. It’s notable that Tebow was such a bad prospect that the scout who scouted him didn’t want his name on the signing, so they passed it to the director of marketing, and that they’ve already promoted him without just cause. Maybe the marketing reasons are what they’re thinking here too, especially with this team seemingly unlikely to contend any time soon. But if the clown statements do come to pass, it’s really going to be a circus.

5 thoughts on “New Mets’ GM talks starting 31-year-old Tim Tebow in AAA or maybe even MLB next year, gets roasted by Mike Francesa”