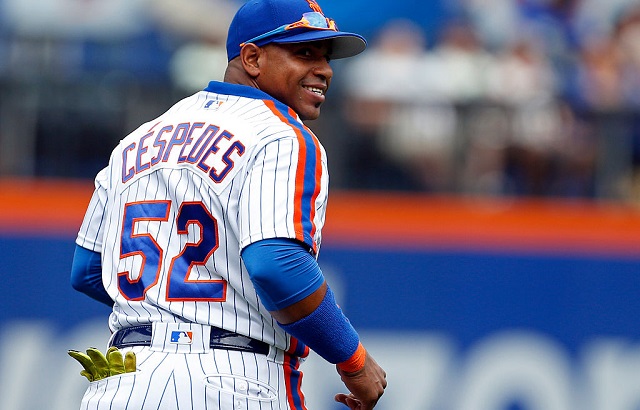 It’s possible that the New York Mets will figure out a way to bring Yoenis Cespedes back. Let’s start with that.

On Friday, Cespedes opted out of the three-year, $75 million that he signed with the Mets last offseason. He’s coming off a season in which he compiled a triple-slash average of .280/.354/.530 with 31 home runs, and at 31 years old is looking for one major payday.

That said, Cespedes was a year younger and coming off an even stronger season last November when he was looking for that same major payday. Instead, he wound up returning to the Mets. So there’s always a chance that Cespedes’ free agency this time around follows the same path. We know he loves playing in New York, and that there are some legitimate questions about his longevity, so maybe no one gives him the dollars he wants and again, he takes a lesser offer from the Mets.

Possible? Sure. Likely? Hell no, which means the Mets are going to lose Yoenis Cespedes this offseason. With that, the team’s odds of taking advantage of all their great young pitching and bringing a World Series title to Queens are about to take a major hit.

And all because Mets owner Fred Wilpon is either too broke to spend money, thanks to his past friendship with swindler extraordinaire Bernie Madoff, or too cheap to reinvest some of his profits into the Mets. Or a combination of both.

It’s not just that the Mets play in a big market, as Vinny from the Bronx would no doubt say. They’re also coming off a season in which they finished ninth in overall attendance (one season after lining the Wilpon’s pockets with cash from a World Series run) and the team’s Regional Sports Network, SNY, was the most watched RSN in Major League Baseball. More viewers means more commercials, which means more money, which, in theory, should mean more being spent on payroll.

But that’s not how these Mets do business. The Mets last season spent $156 million on player salaries, the 13th-highest number in MLB, and it looks like that number is going to plummet even further in 2017.

Cespedes is likely gone, same with Neil Walker. The Mets extended Cespedes a qualifying offer and are expected to do the same with Walker. That means both, if they wanted to, could return to the Mets on one-year deals (Cespedes for $17.2 million and Walker for $16.7). But if they sign elsewhere, the Mets will receive a draft pick as compensation.

So let’s assume Cespedes is rewarded for being one of baseball’s best players over the past two years. And that Walker, also 31 and coming off a season during which he hit a strong .287/.347/.476 and swatted 23 home runs in just 116 games, also receives a take-care-of-your-grandkids contract from another team.

That’s two of the lone Mets who made significant money last season getting wiped off the books. Suddenly, the Mets are down to a payroll of just under $107 million, according to ESPN New York’s math. For a comparison, that’s just about what the minor league-like Twins spent on payroll last season.

What makes all this so egregious is that the entire rotation is comprised of low-cost, team-controlled studs. Neither Jacob deGrom, Matt Harvey, Noah Syndergaard, Zack Wheeler, Steven Matz are making eight figures. The same goes for the majority of the everyday lineup. Right now, just three Mets are.

There’s Curtis Granderson ($15M), who’s on the last year of his contract. There’s David Wright ($20M), but 75 percent of his contract will be covered by insurance if he doesn’t return to the field. And there’s Jay Bruce ($13M), who was brought in at last year’s trade deadline to bolster the lineup, but also to replace Cespedes this year. Only he’s not nearly as good as Cespedes and he’s a left-handed hitter, of which the Mets have too many.

Being prudent and frugal is one thing, being cheap is another. The Mets — and general manager Sandy Alderson, in particular — have been wise about how they’ve spent their cash in recent years. Even big-market teams should be built through the draft, and with young and low-cost players. The difference is that those teams are also supposed to recognize the type of players worth handing money to — and then, thanks to their revenues, reel them in.

Cespedes will likely receive a deal this offseason that one day renders him an albatross. No one wants to be paying him $20 million four years from now.

Sometimes, though, it’s OK to overpay a bit for a player, especially if you’re built the right way. The Mets have done so. But instead of leveraging that roster construction into free agent signings, they seem content to continue acting like the Tampa Bay Rays. Cespedes is the type of player the Mets should be doing everything they can to keep: an All-Star still seemingly in his prime. Elite players are who they should be overpaying to keep or sign.

So, yeah, maybe they decide to go out and sign Dexter Fowler or Ian Desmond to play center field, or Justin Turner to play second base, or maybe Michael Conforto has a bounce-back year. But none of those players have a bat that can match Cespedes’. None of them can carry a lineup like him. Either the Mets don’t realize this, or they just don’t care.

I’m not sure which would be worse.