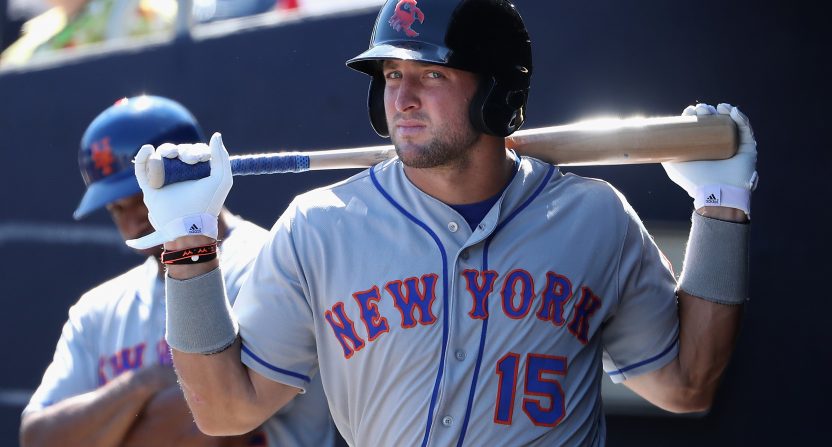 If you thought the New York Mets were just giving Tim Tebow a one-year audition to play baseball, think again. The Mets are inviting Tebow to spring training next month to give Tebow the opportunity to continue pursuing a career in baseball. And ticket and merchandise sales, of course, for the Mets farm system.

The Mets issued a press release to announce the list of players receiving invites to join the Mets for spring training beginning next month. Nestled in toward the bottom of the list of invitees was none other than outfielder Tim Tebow.

I cannot tell you how many minor league players have told me how disgusted they are in regards to the opportunity the Mets have handed to Tim Tebow. Feel as though they have had to grind and work hard their whole life to get a sniff. Some will never get a big league camp invite.

As of now, there is no word to confirm whether or not Tebow will be accepting his invite to spring training with the Mets, so we’ll have to keep an eye on that one to see if Tebow is going to give baseball a second crack of the bat this upcoming season.

A year ago, Mets manager Terry Collins was hoping to see Tebow in spring training games even though the former Heisman Trophy winner and SEC Network analyst was struggling in the Arizona Fall League leading up to the spring. Tebow plundered his way through the spring training and began his baseball career in the minors. Despite a growing sense of backlash from beyond, the Mets found it in their best interest to continue promoting Tebow up through the farm system despite a lack of production. Maybe that is just how desperate the Mets had become during a wasted season in the majors. Tebow was good for a highlight here or there, to be fair, but his baseball trajectory was not what should have been rewarded for promotion in the minor leagues.

It would be impossible to overlook the impact Tebow had at the gates. If Tebow was playing, fans would come out to see him, because he is genuinely a good guy that people want to root for. Yes, there is a religious aspect to all of this as well, but the bottom line was the most important thing to the Mets. Having Tebow floating through the minors injected some revenue into the affiliates with increases in ticket sales and jersey sales. Even teams welcoming a Mets affiliate in for a series designed marketing promotions around Tebow’s scheduled appearance at the ballpark. Will a second year of the Tebow traveling bus show in the minors be able to keep those trends going in a positive direction? The Mets hope so.