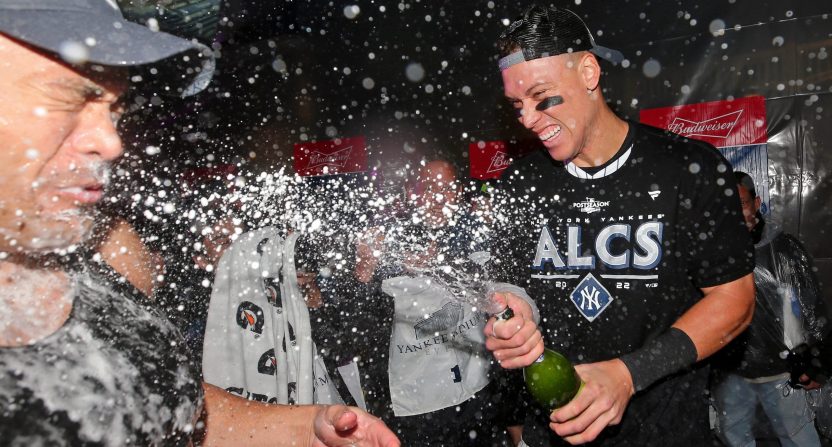 The New York Yankees are going to the ALCS after knocking off the Cleveland Guardians 5-1 in Game 5 of the ALDS on Tuesday at Yankee Stadium (the game was moved from Monday to Tuesday due to rain, with the decision made very late on Monday night).

The Yankees win Game 5 to reach the ALCS! ⚾️ pic.twitter.com/0H3NAlrEoV

The Yankees didn’t take long to get all of the runs they would need in the game, with Giancarlo Stanton hitting a three-run homer to right field in the bottom of the first inning.

The Yankees' Giancarlo Stanton with a 3-run homer in the 1st inning of Game 5! ⚾️ pic.twitter.com/175DC3bpfo

After hitting an American League record 62 homers in the regular season, Aaron Judge hit his first dinger of the postseason with this solo blast in the bottom of the second inning (Yankees fans weren’t booing him this time):

No boos on this one.

Aaron Judge homers to give the Yankees a 4-0 lead in Game 5! ⚾️💣 pic.twitter.com/Bycq2MS7sv

Judge now has four homers in winner-takes-all games, the most in MLB history.

Aaron Judge with a monster solo shot, to give the Yankees a 4-0 lead. Per the Yankees, that’s his 4th homer in a winner-takes-all game, the most in MLB history.

The Yankees will face the Houston Astros in the ALCS, and that could be the best series of the entire postseason. The winner of the ALCS will be the clear favorite in the World Series against the Philadelphia Phillies or San Diego Padres.

Here’s a peek at how the baseball world is reacting to the Yankees advancing to the ALCS:

Yankees fans chanting 'WHO'S YOUR DADDY!" every time Josh Naylor gets out is exactly why celebrations should be MORE prevalent in baseball

Fans are bringing more signs to the game, standing up every time Naylor comes to the plate, everyone is more engaged, plus the drama!

the sheer magnitude of the contrast in vibes between the Padres-Phillies NLCS and the Yankees-Astros ALCS are absolutely astronomical. one of the largest Vibe Differentials we've ever seen

Today is the 4th time that Aaron Judge and Giancarlo Stanton have homered in the same postseason game, the most instances by a pair of teammates in @Yankees history. pic.twitter.com/FtmwUqG9kR

That's the lowest team BA for any postseason series they won in franchise history.