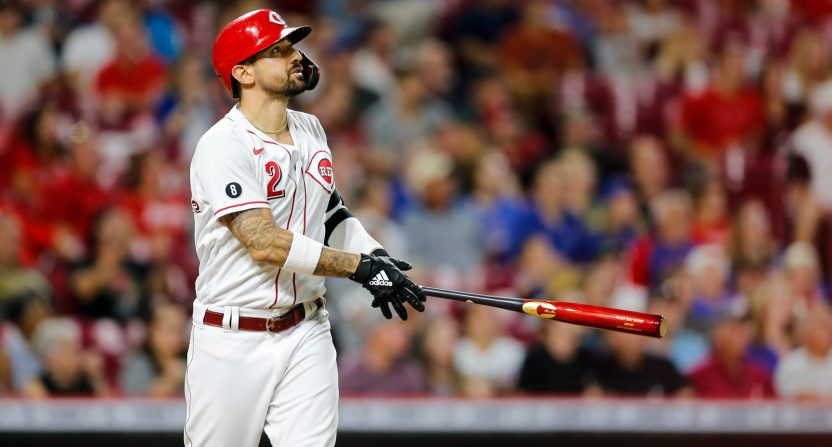 The Philadelphia Phillies are all-in offense- and may just be saying “who cares?” on defense.

Castellanos gets $100M for 5 years from Phils

Additionally, he doesn’t walk all that much (7.0% last year and 6.6% for his career; .329 career on-base percentage), which puts even more pressure on him to consistently hit the heck out of the ball.

And then there’s his defense, which is only going to provide negative value, putting even more pressure on him to consistently hit the heck out of the ball. In 4,242 2/3 career innings in the outfield, he’s been worth -48 defensive runs saved (DRS). Over 1,123 innings with the Reds in 2021, he was worth -7 DRS. It’s been as bad as -19 DRS with the Tigers in 2018. He’s a corner outfielder, but for all intents and purposes, he’s a DH.

This comes after the Phillies signed Kyle Schwarber to a four-year, $79 million deal earlier in the week. Schwarber offers an extremely similar profile to Castellanos: terrific bat (.928 OPS and 145 wRC+ last season split between the Washington Nationals and Boston Red Sox), but he’s a corner outfielder or desperate first baseman (as the Red Sox used him sometimes) only. While his corner outfield deficiencies have been exaggerated over the years, he’s certainly not “good” out there either- and he was valued as a below-average outfielder last season by the metrics, coming in at -5 DRS. The slugger’s body also doesn’t figure to age well defensively.

Here’s where it gets particularly alarming: the Phillies had literally the worst defense in the majors last season by DRS! Philadelphia was valued at -54 DRS, which was 13 DRS worse than the next-worse team.

I have some questions for the Phillies. pic.twitter.com/sDw4C0yK2K

Defense is often an overlooked trait when evaluating teams, and it’s frequently a crucial one. For context, here’s how recent World Series champions performed in the DRS department…

As you can see, the 2011 Cardinals are the last team to not finish top-15 in the majors in DRS and go on to win a championship- and they still weren’t anywhere close to as bad as last year’s Phillies defensively.

So, the Phillies were already awful defensively, and then they added two defensive liabilities to the lineup this week. Yes, the DH being in the NL now helps, but both players are sure to play quite a bit defensively- and the Phillies already had enough players that should probably be DH’ing anyway! Really the only player that stands out as a plus defender on the team is catcher J.T. Realmuto.

The good news is that the lineup — for offensive purposes — is stacked (though not quite to Dodgers levels). Castellanos and Schwarber join a lineup that features Realmuto, Bryce Harper, Rhys Hoskins, and Jean Segura. They’re going to crank many dingers.

Additionally, FanGraphs currently projects the Phillies’ starting rotation to be fourth-best, led by two ace-level arms in Zack Wheeler and Aaron Nola. So, the starting rotation may at least keep the run prevention okay enough, especially when considering how good the offense figures to be.

Phillies are planning to win a lot of 7-6 games this year https://t.co/z2LWhYeMNd

The 2022 Phillies’ roster construction is very unique, and it’s going to make them one of the most interesting teams to follow this season.