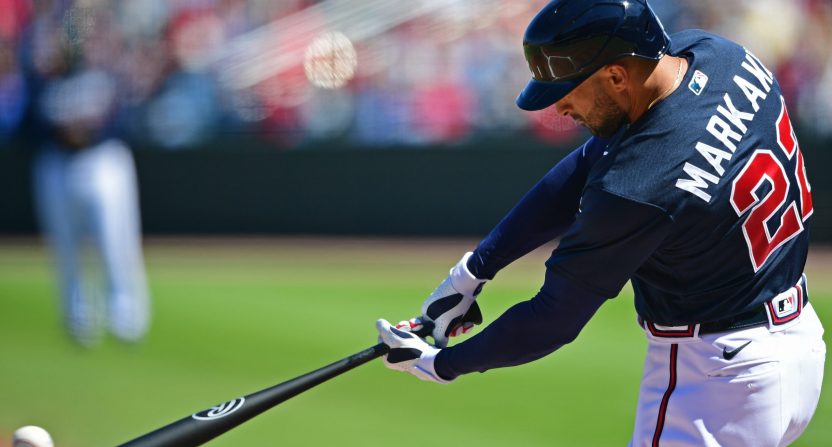 Weeks after opting out of the 2020 MLB season, Atlanta Braves outfielder Nick Markakis is opting back in.

Nick Markakis has changed his mind and now plans to play for the Braves the rest of the season.

Markakis claimed that he “missed the game” and that his initial choice to opt out was a rash decision.

Markakis: “sometimes in life you make rash decisions. You think through things and now that I’m in this situation, do you want to come back? Yeah. I missed the game. I miss competing” #Braves

The Braves are 2-3 this season, and more than half of their 26 runs scored came in a 14-1 drubbing of the Mets on Sunday. Atlanta’s outfield has struggled through the season’s first week, slashing .173/.235/.387 with four homers, including zero from Ronald Acuna Jr, who has struck out 12 times in 23 plate appearances. Primary DH Matt Adams has also not produced, slashing .176/.222/.353. Conceivably, there is room for Markakis in the lineup with Adams struggling and Marcell Ozuna’s defensive concerns in left field.

But with the return of Markakis, the Braves are looking at a glut of outfielders. In addition to Ozuna and Acuna, Atlanta’s outfield consists of defensive whiz Ender Inciarte, Adam Duvall, and newly acquired Scott Schebler, along with utilityman Charlie Culberson and Austin Riley, a third baseman by trade who has played in the outfield over the last two years in the majors. Throwing Markakis into the mix means that the Braves will be facing a roster crunch once the limits are decreased. Schebler, who hasn’t yet played for the Braves, and Culberson are the most likely names on the chopping block once that time comes.