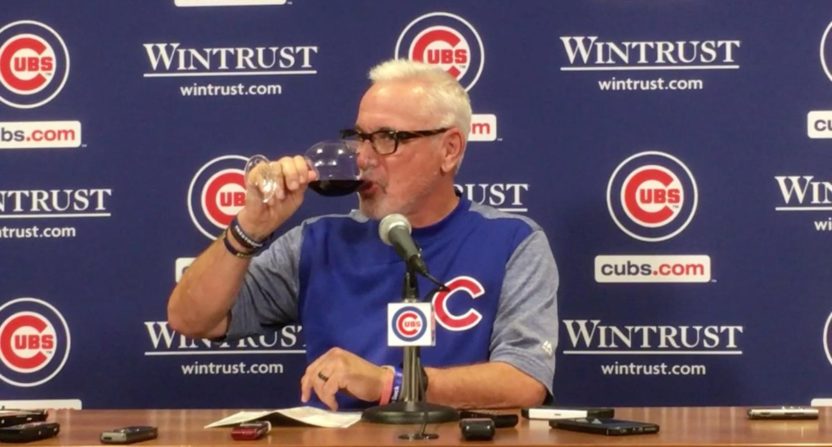 The Cubs won 92 games in 2017, reaching a third straight NLCS. Obviously they won the World Series in 2016, and in 2015 they won 97 games. By those standards, it’s easy to look at 2017 and call it a disappointment, as indeed some have done, but that’s just bad analysis. The Cubs weren’t as lucky with their health in 2017, and the fringes of the roster weren’t as good as they’d been the prior two years, especially the bullpen. That hurt them in the postseason, but the Dodgers are very good, too.

Still, given the trend of success, as well as Joe Maddon’s insistence during the playoff run that the coaching staff would remain intact, it was a bit surprising when the Cubs ended up cleaning quite a bit of their coaching staff house. Pitching coach Chris Bosio and hitting coach John Mallee were both let go, as was third-base coach Gary Jones. Considering the Cubs have averaged 97 wins over the three seasons this coaching staff has been together, it’s certainly a bold decision.

Some media people have seized on the changes as a sign that Theo Epstein’s front office is losing patience with Joe Maddon:

#Cubs cleaning house on coaching staff. If you don’t think this means the heat is on Maddon, you’re fooling yourself.

That’s a tempting theory for some fans dissatisfied with Maddon’s playoff performance this year, or even fans who just don’t like the guy, despite the World Series he helped deliver to the north side of Chicago.

As with the case of most crackpot online theories, though, this one is easily debunked. When Joe Maddon arrived in Chicago, it was via what can best be described as a weird situation. The Cubs weren’t unhappy with their coaching staff at the time. They fired Rick Renteria to make room for Maddon, of course, but Mallee and Bosio were respected coaches, valued for their work with the young Cubs. The tail end of 2014 saw Jake Arrieta emerge as a weapon, while Anthony Rizzo rebounded from a dismal 2013 to post what remains one of his best offensive seasons.

That coaching staff had been chosen specifically for its ability to work with young, still-developing major leaguers, and Epstein wasn’t going to break up that staff entirely; change on that scale could have jeopardized the development work they’d emphasized so strongly. Instead, Maddon brought along Dave Martinez as his bench coach, worked with the staff that was in place, and immediately overachieved in 2015. The Cubs won a World Series in 2016, and now here we are. So, why would Maddon want to make these moves now, and perhaps more importantly, why would Theo Epstein be okay with this kind of shakeup in the wake of a fairly successful run?

First, because the removals weren’t made in a vacuum. For one, the replacements are already in place, as the Cubs have hired former Red Sox coaches Chili Davis and Brian Butterfield to replace Mallee and Jones. Bruce Miles of The Daily Herald pointed out that Davis got results in Boston:

The Cubs are about to close a deal with Jim Hickey that will make him their new pitching coach, a source familiar with the situation said Thursday, part of a much broader shakeup to Joe Maddon’s staff and a team that will need to replace 40 percent of the rotation and find a new closer.

The Cubs essentially limited their search to one candidate after firing Chris Bosio last week, knowing Hickey’s close relationship with Maddon, his reputation for helping the Tampa Bay Rays consistently develop young pitchers like David Price and Chris Archer and his roots on the South Side of Chicago.

Maddon told reporters on Thursday that these moves were driven more by who was available than by any dissatisfaction with the old staff, and that’s probably true. It’s fitting, too, as that’s how Maddon ended up in Chicago in the first place. But Maddon making changes doesn’t place any more pressure on him than there was already. The first sign of that should be obvious: if the Cubs front office was unsure about Maddon’s long-term viability, why would they grant him so much authority over the new hires?

But more than that, Theo Epstein, Jed Hoyer, Maddon, and the rest of the Cubs brain trust understands that the Cubs are in a much different place than they were after the 2014 season. There’s less focus on development at the major league level; while the Cubs still have plenty of young talent already on the team, the core has been in place for most of this three-season run. It’s a win-now team, and is likely to be one for some time going forward. And the Cubs core of players are also, in theory, going to be more capable of adjusting to new voices than they might have been three years ago.

It’s clear that 2017 marked a transition point for the Cubs, the end of one mini-competitive window in the middle of a much larger competitive window. The team is likely losing two starters, needs to rebuild a bullpen, and probably needs another complete offensive player. It’s going to feel a bit different, but that’s natural, and it’s how a good team should approach each offseason, and that goes for evaluating the coaching staff as well.