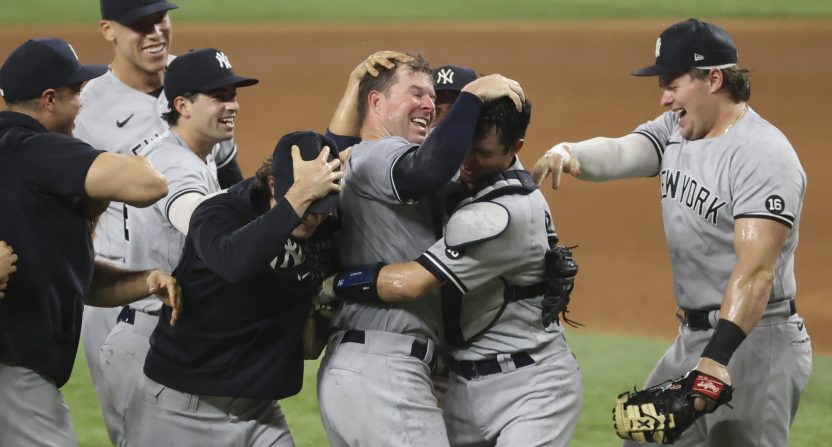 Not even 24 hours after the 2021 MLB season’s latest no-hitter, there was another one.

On Wednesday night, Corey Kluber of the Yankees threw the season’s sixth no-hitter. (Seventh, if you count Madison Bumgarner’s seven-inning doubleheader gem against the Braves.) An evening earlier, Spencer Turnbull of the Tigers threw the fifth no-hitter of this young season.

We’re not even at Memorial Day yet and this MLB season has seen the second-most no-hitters ever. In 1990, 1991, 2012, and 2015, seven no-hitters were thrown. It wouldn’t at all surprise me if that record was tied by the first day of June.

Going back to last season, we’ve seen eight no-hitters in the last calendar year. (And think: we’re only talking about a sample size of a little over 100 games here.) Lucas Giolito no-hit the Pirates last August, and Alec Mills no-hit the Brewers three weeks after that.

I thought it would be sort of interesting to see how many no-hitters have occurred in MLB since various other feats have happened. If you’re squeamish, maybe you should look away.

There have been 21 perfect games in the modern era, and the last perfect game (which, by nature, is also a no-hitter) was Felix Hernandez’s against the Rays in 2012. Since then, 33 no-hitters have been thrown.

Hernandez’s own Mariners have thrown two more (Hisashi Iwakuma, James Paxton) and have also been no-hit four times, twice each in 2019 (combined no-nos from the Angels and Astros) and 2021 (Means, Turnbull). There were zero no-hitters between Hernandez’s perfect game and the previous perfect game because Matt Cain’s unblemished effort came just two months earlier. 2012 was the year of three perfect games, with Philip Humber infamously shutting down the Mariners in April of that year.

The four-homer game has only happened 18 times in MLB history. Naturally, back in 2017, it happened twice in three months. J.D. Martinez hit four bombs against the Dodgers in September, and there have been 15 no-hitters since then.

There were zero no-hitters between Martinez’s four-dong effort and Scooter Gennett’s incomprehensible performance in June of that year, though Edison Volquez’s no-hitter for the Marlins came just three days before Gennett pounded the Cardinals. When there was a nine-year gap between four-homer games in the 2000s (Carlos Delgado in September 2003 and Josh Hamilton in May 2012), the league saw 20 no-hitters. We’re nearly at that same total in half the time.

The unassisted triple play has happened just 15 times, but it’s not nearly as sexy as any rare achievement in baseball history. An unassisted triple play follows the same pattern: a fielder snags a line drive, tags a runner, and steps on the bag (with those two steps in whatever order). It’s super cool, but it’s over in a flash and usually accomplished by a lesser-known player.

Case in point: the last unassisted triple play was pulled off by Eric Bruntlett of the Phillies on August 23rd, 2009. He never played in the majors after that 2009 season. Anyway, since Bruntlett’s achievement, there have been *48* no-hitters. His Phillies have thrown four of those — two by Halladay, one by Cole Hamels, and a combined effort started by Hamels. Prior to the Bruntlett unassisted triple play, we saw it happen in both 2007 (Troy Tulowitzki) and 2008 (Asdrubal Cabrera). There were four no-hitters between Cabrera’s and Bruntlett’s, and two between Tulowitzki’s and Cabrera’s.

A 10-RBI game is fun because it’s such a ridiculous number. It’s happened 16 times, the last by Mark Reynolds (then with the Nationals) on July 7, 2018. Since then, we’ve seen a dozen no-hitters over the last three seasons, none of which involved Washington.

I love the six-hit game, because it requires two special things to happen: A player has to actually get up to the plate six times and then has to get six hits. It’s not easy!

116 players have gotten six hits in a nine-inning game (and another 47 have gotten there in extra innings), and the last one was Philip Ervin of the Reds. Ervin collected his sextet of hits against the Rockies on July 13, 2019, the day after Taylor Cole and Felix Pena’s combined no-hitter for the Angels. We’ve seen 10 no-hitters since, including Miley’s for the Reds earlier this month. That number falls to nine if you include extra-inning six-hit games, as when Rafael Devers collected six hits in 10 innings on August 13, 2019.

Hitting for the cycle: 8 no-hitters

There have been nearly as many no-hitters (311) as cycles (330) in MLB history, but we haven’t seen one in a while. Cavan Biggio’s cycle for the Blue Jays on September 17, 2019 was the sixth and final cycle of the 2019 season, and the last one to occur in MLB. We’ve seen all eight no-hitters discussed today since then, though Biggio’s Jays weren’t involved on either side in any of them. Hey, speaking of the Blue Jays…

The Jays are one of five MLB teams with just one no-hitter thrown in franchise history. Since Dave Stieb finally got it over the finish line against the Indians on September 2, 1990, there have been 87 no-hitters thrown across baseball. Toronto was victimized four times, including twice by Justin Verlander and once by the Canadian Paxton.

The Brewers are another one of those teams with just one no-hitter and have the second-longest no-hitter drought in baseball. Juan Nieves no-hit the Orioles on April 15, 1987, and Milwaukee hasn’t gotten back to the promised land since. They’ve been no-hit just three times since then, however. On a cool note, those no-hitters came in an American League game, an Interleague game, and a National League game. They’re the only team with that trifecta.

Len Barker threw the last Indians no-hitter, a perfect game, 30 years ago on May 15th, 1981. Over 100 no-hitters have happened over the three decades since, and Cleveland has been victimized five times — including twice this season.

Sorry, that’s mean. But it’s wild that 60 percent of baseball’s no-hitters have happened since the Indians were last World Champions.