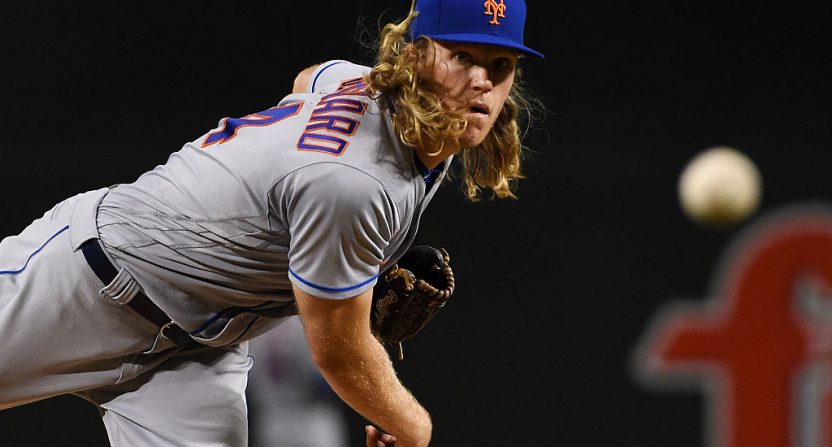 Spring training has already been underway for a couple of weeks, which means soon enough we will be in prime “bat flipping hot take” season. You won’t hear any such talk from New York Mets pitcher Noah Syndergaard however. He also told the New York Post that he’d even respect someone who flipped a bat in his face if such an act were to occur.

“Just sheer enjoyment and excitement and just being in the moment. The bat flip, I have no problem with it. I can’t imagine how much emotion is going through him that he probably might not have even realized what he was doing. My big thing is having respect for the game.”

A show of emotion to some is a disgrace to the sport’s integrity. This probably is judged on a sliding scale based on how much energy is exhausted in the act of throwing a bat. The old school baseball fan will look at that act and view it as showing off your opponent, but would those same fans have a problem with a pitcher pumping his fist following a key strikeout to get out of a jam in a late inning situation? Probably not. But for some reason, bat flips are viewed in a different light, because that’s not how the game used to be played.

Syndergaard also weighed in on Jose Bautista’s legendary bat flip during the 2015 ALDS, and revealed that he had no problem with it at all.

“I wouldn’t say he was disrespecting the game at all,” Syndergaard said. “I see it as he was having fun out there. He was trying as hard as he possibly can to do what he wants for the team. I don’t see that as disrespect at all. I see that as pure emotion.”

Syndergaard’s comments to the New York Post are a tad refreshing and echo the sentiments of Bryce Harper and others who want to break down the walls of unwritten rules in baseball that some players take a little too seriously. Perhaps this is another sign that there is a no breed of ballplayer in the game, and the attitudes are changing?