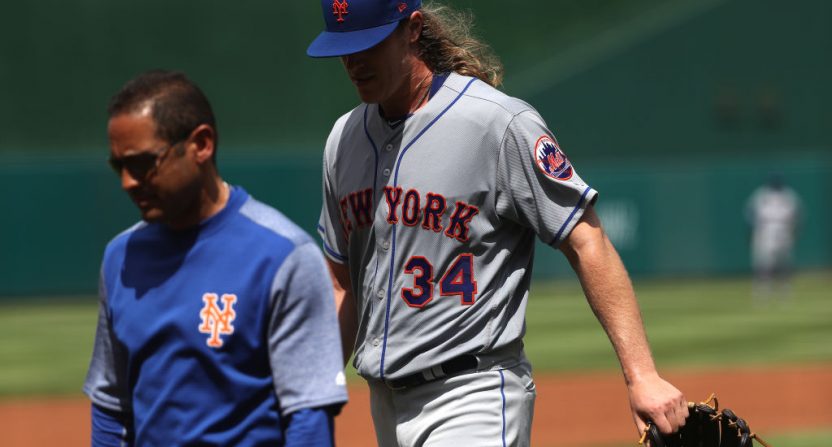 A bad start to the regular season just got worse for the New York Mets. New York announced on Monday, that All-Star pitcher Noah Syndergaard has been placed on the 10-day disabled list with a partial tear of his right lat muscle.

Syndergaard was removed during the second inning of the Mets’ humiliating 23-5 loss against the Washington Nationals on Sunday after experiencing discomfort on the right side of his body. He allowed five runs on five hits over the 1 1/3 inning start, striking out two and walking his first two hitters of the 2017 season.

The injury comes just days after Syndergaard missed a start against the Braves and refused to have an MRI.

He had missed his previous start Thursday due to biceps and shoulder discomfort. He had been scheduled for an MRI on Friday but declined to have one after throwing a bullpen session.

Syndergaard’s injury will deeply impact the Mets’ fleeting chances. New York already sits four games under .500 at 10-14, last place in the NL East and 6.5 games back of the Nationals. Before Sunday’s start, Syndergaard looked like one of the best pitchers in baseball, pitching to a 1.73 ERA in 26 innings over four starts, punching out 30 wihtout a walk. The Mets will rely on a rotation consisting of Jacob deGrom, Matt Harvey, Robert Gsellman, and Zack Wheeler in Syndergaard’s absence, which is problematic given that deGrom is the only one of that quartet with an ERA under 4.00 this season.

Interestingly enough, Syndergaard’s injury is similar to the one suffered by Mets teammate Steven Matz in 2015, which caused him to miss more than two months of action. However, given the spotty injury history Matz has had during his career, comparing his recovery to Syndergaard’s isn’t quite apples to apples. Despite that, the timeframe for Syndergaard’s return is quite unclear and it wouldn’t be a surprise if his return came closer to the All-Star Break than Memorial Day.