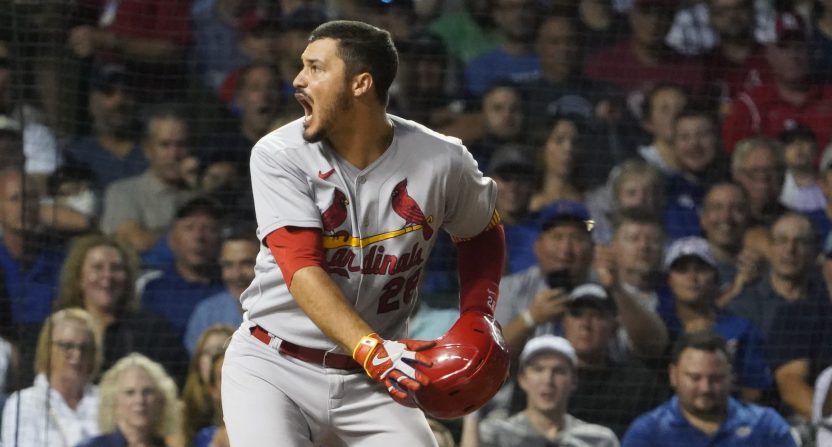 With the Cardinals trailing 3-0 in the top of the third inning, Arenado came up with two outs and two on. On a 3-2 pitch, Chicago pitcher Luke Farrell’s pitch was clearly outside. Arenado began to offer it but held up. He felt that he checked his swing. Home plate umpire John Libka disagreed and ruled that Arenado had gone around.

Arenado quickly argued the play. He got into Libka’s face and said a few words. As angry as he was, it seemed as though the incident would end there. But shortly after Arenado stopped arguing and turned away from Libka, the home plate umpire ejected him.

There are three issues at play here.

By all appearances, Libka did not get the call right. Arenado appeared to check his swing.

To be fair, it sure does look like Arenado is right to be upset with this call pic.twitter.com/44Y3w4juUa

Finally, the sequence of events following the strike call don’t put Libka in a good light.

If Arenado said one of the magic words, the ejection was warranted — regardless of whether the call he’s arguing was correct. But if Arenado uttered one of those words, he should have been tossed immediately. He wasn’t. The ejection didn’t come when he was in Libka’s face or even saying anything. It makes it a little harder to believe that what Arenado said would have triggered an ejection.

Finally, Libka didn’t do himself any favors by smirking immediately after ejecting Arenado, then again as Arenado resumed his argument and Cardinals manager Oliver Marmol came out to pick it up.

The whole chain of events left the baseball fans frustrated with Libka.

The home plate umpire literally smirked and laughed as he ejected Nolan Arenado. What is going on lately with the hubris of these @MLB umps? Embarrassing for the entire sport.

A. If its close, you check down to first. He has the better view.

B. You don't throw somebody out when he's starting to cool off. Arenado had his back turned, and Libka threw him out with a smile.

Feel for fans who paid to see Nolan Arenado and instead get to watch John Libka
Video: @BallySportsMW pic.twitter.com/USWQszp2Nd

Thank God Arenado is gone, so we can see Libka ump this game like everyone tuned in for.

For those looking for humor, Arenado’s ejection came only moments after Cubs broadcaster Pat Hughes found out that he was being inducted into the team’s Hall of Fame. Several viewers found that funny.

Every time Pat Hughes has learned he would be inducted into the Cubs Hall of Fame, Nolan Arenado has been ejected. Facts.

Pat Hughes finding out he's being inducted into the Cubs Hall of Fame like 2 minutes before Nolan Arenado blows up at the HP ump and gets tossed… all-time moment.

Arenado can be the first Cardinals player to congratulate the great Pat Hughes.

Regarding the ejection, none of this looks good for Libka. The least frustrating element of the play from his point of view was the call itself. Missed calls are frustrating but we’ve seen a bunch from MLB umpires this season. That, in and of itself, is tolerable.

He should have appealed to first base. Then, he should have either ejected Arenado when he was yelling or opted against it. Ejecting Arenado after he’d cooled down (and with a smirk on his face) was just a bad look for Libka. There’s no way to defend that.

None of this is to say that Arenado is blameless. He’s not. He needed to do a better job of maintaining his composure. We’re in late August and his team is in a playoff race. He can’t be getting ejected.

But Libka’s handling of the situation was poor. One of the biggest frustrations with MLB umpires is that, too often, they appear to make themselves the show. Maybe that’s not what Libka was trying to do here. But it sure seems that way.