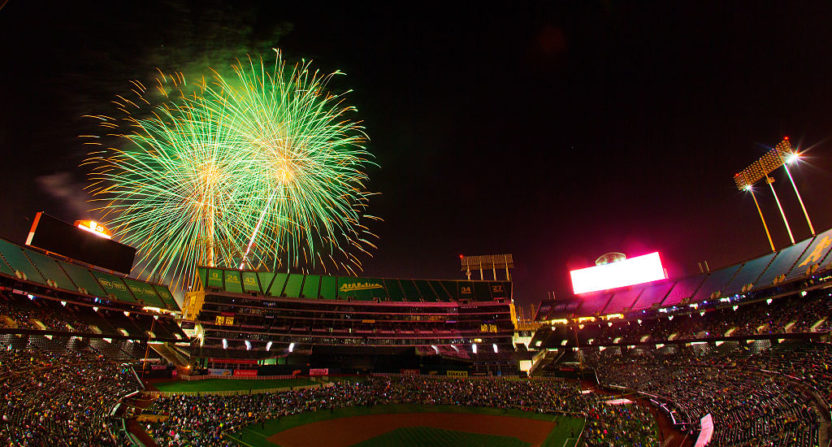 With the impending departure of the Golden State Warriors for San Francisco and the Oakland Raiders for Las Vegas, the Oakland A’s will soon be the only major professional franchise in town. The city has a vested interest in making sure the baseball team is happy and the best way to make that happen is to make sure the A’s have a brand-new stadium to call home (especially since that stadium would reportedly generate $3 billion back to the city).

For months, the team has offered up three options: The current site of the Oakland Coliseum in East Oakland, a waterfront park at the Port of Oakland’s Howard Terminal, or a spot in the Peralta Community College District near Laney College and Lake Merritt in Downtown Oakland. It’s long been rumored that the Laney College site was the preferred one and those rumors were borne out Wednesday with the official announcement that the team intends to build a new 35,000-seat, privately financed ballpark there.

Our vision is to build a new ballpark for Oakland at the Peralta site. Join the conversation at https://t.co/vLuiX01aT0 #RootedInOakland pic.twitter.com/oW8b0CthwM

“Finally, we’ve got our site,” said team President Dave Kaval. “It’s really the strongest location when it comes to private financing, and that’s really an important component to be successful.”

While the team has set a timeline of opening their $500 million-plus stadium in 2023, there’s a lot of work to be done. First and foremost, they need to purchase the 13-acre site from the Peralta Community College District, which not only owns it but also has a headquarters there, meaning they’ll need to relocate. The team has offered to sweeten the deal by building housing and commercial properties on a parking lot north of the site, the revenue from which will go back to Laney College. The A’s would also build a parking garage for the college.

The team also has to go through an environmental impact report, get all relevant city permits, and get approval from the Oakland Alameda County Coliseum Authority on the deal.

There are concerns by some that the stadium will usher in a gentrification of the region, pushing out longtime residents and businesses. The mayor had voiced a preference for the waterfront site but said she was open to the Laney site as well. Ultimately, Oakland can’t afford to lose its last major sports franchise and the A’s will be sure to use that leverage when necessary during negotiations.